Family of Clodagh Hawe want inquiry like with other murders 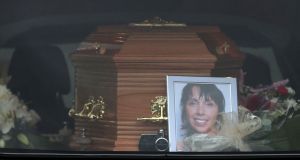 The campaign by the family of Clodagh Hawe for more information about her murder and those of her three young sons puts into focus again the State’s approach to family murder-suicide cases.

In cases where the killer has died by suicide, there is no suspect to prosecute. A Garda investigation is still carried out, but only to inform a coroner’s inquest.

But an inquest only establishes cause of death. It does not apportion blame or seek to establish motive for murders.

Mary Coll and Jacqueline Connolly want change. They say their daughter and sister, Clodagh Hawe (39), and her three sons, Liam (13), Niall (11) and Ryan (6), were so precious to them they want all the information possible about why they were murdered.

They say it’s not good enough for the criminal justice system to decide not to thoroughly inquire into the murders the way it would if killer Alan Hawe (40) was still alive to face justice.

Mary and Jacqueline also contend that the criminal justice system could learn from the case, which might save others from being murdered by a spouse, partner or parent in the future.

The reality is that, beyond the limited inquest process, there is no tradition in Ireland of expending time and resources investigating killings for the sake of transparency and as a service to family members left behind.

But until relatively recently there was no tradition of investigating deaths in prison or Garda custody beyond the inquest either. But in the past 15 years, the office of Inspector of Prisons and the Garda Síochána Ombudsman Commission (Gsoc) have been created.

Now every death in custody is investigated by the inspector and Gsoc to ascertain if the prison service or Garda have questions to answer or if either can learn anything from these deaths. Reports are compiled with the findings and they are published for public consumption in redacted form, with the families also briefed privately.

When Gsoc and the Inspector of Prisons carry out investigations, the families of the dead are interviewed as part of the evidence-gathering process.

They supply information and are afforded the opportunity to say what questions they would like the inquiries to answer. Those questions are not always answered, of course.

Sometimes the information is simply not available or the motives for killings or suicides cannot be established. And at times answers are found that families do not want to face.

But at least the families know their loved one’s death was worthy of, and afforded, an investigation by the State and that their own voices were heard by the investigators.

A major 15-year review of homicides is under way within the Garda, after problems were found with the way some domestic homicides were recorded.

The first of those recording errors was noted during an initial review of a small number of domestic violence killings. That process sought to assess if gardaí missed any warning signs in the lead-up to domestic-violence killings.

It seems inevitable that when the Garda has completed its review of killings over the past 15 years, the force will begin to automatically conduct reviews of every future domestic killing, just as the Inspector of Prisons and Gsoc now probe every death in custody.

Against that backdrop, in seeking an inquiry that might establish and share all there is to know about why and how Alan Hawe murdered his wife and children; is Mary Coll’s and Jacqueline Connolly’s request really too much to ask?