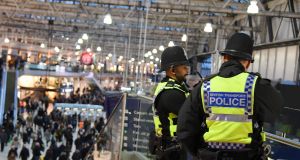 Police at Waterloo rail station in London, on Tuesday. Only the package sent to the Compass Centre offices at Heathrow was opened, causing the A4 envelope the device was in to catch fire. Photograph: Andy Rain/EPA

The results of forensic and technical tests on three incendiary devices sent from the Republic to London transport hubs will be examined by anti-terrorism officers in Dublin in the hope those responsible can be identified.

The small devices appeared designed to catch fire rather than explode. They were sent to Waterloo rail station and buildings on Heathrow and London City airport campuses on Tuesday.

Only the package sent to the Compass Centre offices at Heathrow was opened, causing the A4 envelope the device was in to catch fire.

While the buildings they were sent to were evacuated, staff were later able to return. Some rail services were delayed but flights ran as scheduled.

The devices were in paper A4 envelopes inside plastic Jiffy bags. They bore Irish stamps and postmarks, while the words “Dublin” and “Bus Éireann” were visible on two of the Jiffy bags.

Sources in Dublin said the devices may have been sent by domestic or international terrorists or by a lone wolf attacker for an, as yet, unknown reason. One stressed such devices could be constructed with minimal technical know-how by one person with no support.

Incendiary devices were used by the Provisional IRA and dissident groups after them. Garda sources said the involvement of dissident republicans would be a strong line of inquiry.

Garda officers told The Irish Times they expected the London Met to carry out forensic and technical testing. This included trying to generate a DNA or fingerprint sample for checking against records in the Republic.

A report on the construction of the devices would also be shared with the Irish authorities to determine if they were the same as any the Garda or Defence Forces had dealt with in recent years.

“There can be batteries or cigarette lighters in these devices that may contain barcodes that may show where and when it was bought,” said one security source in Dublin.

“Postmarks may do the same; can you link any of these parcels to any location at any time and might there be CCTV available for that place?

“Sometimes a small piece can be traced or a print or DNA could be taken from the smallest component.”