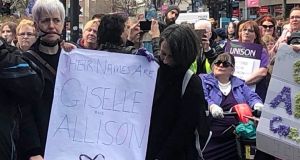 Fundraising initiatives to help pay repatriation costs for a mother and daughter murdered in Newry have raised more than £11,000 (€12,850).

The bodies of Giselle Marimon-Herrera (37), and her 15-year-old daughter, Allison, were found in their apartment in Glin Ree Court last Thursday morning.

The pair had been strangled by Russell Steele. The 38-year-old from Scotland, who was living and working in Newry, then took his own life.

PSNI officers discovered the three bodies after Giselle’s sister contacted police over concerns for her welfare.

Giselle, originally from Colombia, had been living in Newry since 2015.

At the weekend her father, Fabion Marimon, told a Colombian news agency he was selling his taxi to fund his travels to Northern Ireland to take the bodies of his daughter and granddaughter home.

Now three different fundraisers have been launched in Newry to assist the family with travel and repatriation costs.

The Newry Repatriation Fund for Giselle and Allison was launched at Newry Credit Union on Monday afternoon.

Its first donation, for £5,000, was made by Colin Bell from the Kevin Bell Repatriation Fund. It was established by Mr Bell and his wife, Eithne, after their son, Kevin, was killed in a hit-and-run incident in New York in June 2013.

The charity has returned more than 630 bodies to Ireland since.

“Unfortunately, we can only repatriate to Ireland,” said Mr Bell.

“But in a case like this, especially because it’s Newry, we are very happy to give a sizeable donation to bring the girls home to their loved ones and give the family some kind of closure.”

Two other GoFundMe pages, set up by Ógra Shinn Féin in Newry, and Kim Winters, have already raised more than £6,000.

On Monday night, the PSNI issued a statement on behalf of Ms Marimon-Herrera’s family thanking the people of Newry for the kindness shown to them.

“They would also like to thank everyone who made donations to help them in their hour of need,” the statement said.

“As they try to come to terms with their loss they would also ask that the media respect their privacy.”

Meanwhile, Newry, Mourne and Down District Council chairman, Mark Murnin, opened a book of condolence at the council’s Newry office on Monday morning.

“My heartfelt condolences on behalf of myself and everyone in the Newry, Mourne and Down district go the family and friends of Giselle and her 15-year-old daughter Allison, who lost their lives in such tragic circumstances in our city,” wrote Mr Murnin.

Books have also been opened at six council buildings across the district.