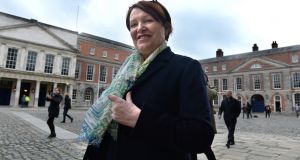 Former garda commissioner Nóirín O’Sullivan has been exonerated of mistreating garda whistleblower Maurice McCabe and of helping to orchestrate a smear campaign against him.

In a report which severely criticised her predecessor, Martin Callinan, and the former head of the Garda Press Office, Supt David Taylor, the Disclosures Tribunal chairman Mr Justice Peter Charleton found Ms O’Sullivan was not party to efforts to discredit Sgt McCabe by briefing the media and politicians against him.

However, he rejected one portion of her evidence and found another to be “improbable”.

While the report found that Martin Callinan worked “cheek by jowl” with his press officer Supt Taylor to discredit Sgt McCabe, it stated there “is no credible evidence” that Ms O’Sullivan “played any hand act or part” in the smear campaign.

“All of the evidence is to the contrary in fact,” Mr Justice Charleton wrote. Rather than collude with Supt Taylor, Ms O’Sullivan got rid of him as press officer when she took over as commissioner.

“She did this because she neither trusted him nor liked him.”

Supt Taylor claimed Ms O’Sullivan was party to the smear campaign. Mr Justice Charleton said Supt Taylor had every reason to lie about this.

He said Supt Taylor was determined to get revenge on Ms O’Sullivan who he saw as the source of his woes including his arrest on charges (later dropped) of unauthorised disclosure of information to the press.

In a single sentence the judge used the word “bitter” eight times to describe the superintendent.

Ms O’Sullivan did not escape criticism entirely. On the subject of whether she had knowledge of commissioner Callinan’s negative views on Sgt McCabe, the judge said it’s improbable she didn’t have “an inkling”.

The judge added it was “more than improbable” the subject didn’t come up during a car journey immediately after commissioner Callinan had called the whistleblower “disgusting” at the Public Accounts Committee (PAC) on January 23rd, 2014.

“It was disappointing to hear her evidence on this,” Mr Justice Charleton said.

The tribunal also largely vindicated Ms O’Sullivan in how Sgt McCabe was treated at the 2015 O’Higgins commission which examined allegations of poor policing practices in the Cavan/ Monaghan district.

The tribunal ruled Ms O’Sullivan had never instructed her lawyers to raise the false allegations of sexual abuse circulating about Sgt McCabe.

“She would not have been at all interested in engaging in any such nasty and discreditable conduct. That does not fit with her character.”

He said her approach was to test if there was evidence to back up the whistleblower’s allegations of corruption. “That is a normal process in respect of any trial where any person alleges improper conduct against another.”

At one stage, counsel for Ms O’Sullivan, Colin Smyth SC, told the commission he had instructions to question Sgt McCabe about his motivation and credibility as a whistleblower. This would have stood in contrast to Ms O’Sullivan’s public expressions of support for Sgt McCabe.

However, Mr Smyth was mistaken in saying these were his instructions, the tribunal noted. The matter could have easily been rectified if Ms O’Sullivan had met her lawyers that weekend to clarify her instructions.

The judge rejected evidence from Sgt McCabe that her barrister had shouted at him during the commission hearings. Transcripts and audio recordings of the proceedings show Mr Smyth’s questioning was calm and professional.

However, he did criticise counsel for Sgt McCabe, Michael McDowell SC, for saying Ms O’Sullivan “would not enjoy the experience” if he was to have a chance to cross-examine her.

“That was very much more than unfortunate. Barristers should never threaten a witness. This was yet a further escalation of emotion. It was completely unnecessary.”