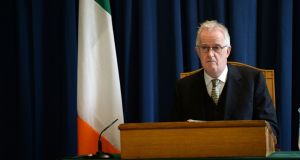 In a nuanced ruling on the central issue about whether Sgt McCabe was smeared, Mr Justice Charleton said a “campaign of calumny” against Sgt McCabe was engaged in by Mr Callinan and his head of the Garda Press Office at the time, Supt David Taylor.

This was limited to the two men and involved “much nodding and winking” about an historical child sex abuse allegation which was made against Sgt McCabe.

At the same time they were also stating to the same people there was no truth to the allegation and that no crime ever took place.

The tribunal was “not convinced” that Mr Taylor had smeared Sgt McCabe to nine key journalists. Mr Justice Charleton doubted the reporters were ever encouraged to write negatively about Sgt McCabe or to even think “less of him”.

On the origins of what was repeatedly described as a “campaign of calumny”, Mr Justice Charleton did not believe Supt Taylor was acting on orders from Mr Callinan, as Supt Taylor claimed.

“The tribunal is convinced he [Supt Taylor] pursued a scheme that somehow evolved out of his cheek-by-jowl working relationship with commissioner Callinan,” he concluded.

“Their plan was that there was to be much nodding and winking and references to a historic claim of sexual abuse while, at the same time, saying that the Director of Public Prosecutions had ruled that even if the central allegation did not have credibility issues, what was described did not amount to an offence of sexual assault or even an assault.”

And while it had been alleged by Supt Taylor, and in turn Sgt McCabe, that the then deputy Garda commissioner Nóirín O’Sullivan knew of a campaign to smear Sgt McCabe, she is exonerated by the tribunal.

However, by far the most damning finding of the tribunal is that Mr Callinan told John McGuinness TD that Sgt McCabe had sexually abused his own children and another person.

Mr Callinan insisted to him that Sgt McCabe was not to be trusted. And he said Mr McGuinness, as chairman of the Public Accounts Committee (PAC) at the time, had “made a grave error” in inviting Sgt McCabe to give evidence before the committee.

“He said to me that . . . [Sgt McCabe] had sexually abused his family and an individual,” Mr McGuinness said.

Mr Callinan, in his evidence to the tribunal, said he did not at any point “speak in derogatory terms of Sgt McCabe nor would I”.

However, faced with the conflicting accounts on such a serious issue, Mr Justice Charleton said he believed the McGuinness version.

“The conversations as described by John McGuinness TD took place,” according to the report.

Mr Callinan had appeared at a PAC meeting in January, 2014. At that PAC meeting Mr Callinan was informed the committee was preparing to invite Sgt McCabe before it later that month.

The tribunal accepted Mr Callinan mentioned sex abuse to Mr McCarthy and spoke in very derogatory terms about Sgt McCabe to Mr Deasy. And Mr Callinan days later met Mr McGuinness in the west Dublin car park to try to convince him Sgt McCabe was a child abuser and should not be trusted.