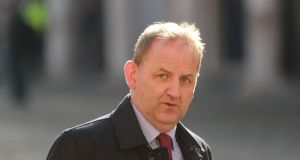 Mr Justice Peter Charleton said he was “driven to doubt bald assertions that fellow gardaí had no problems with Maurice McCabe. Some certainly did have problems with him.” File photograph: Nick Bradshaw

The whistleblower Sgt Maurice McCabe stood up for better standards in public service but was “repulsively denigrated” as a result, Mr Justice Peter Charleton has found.

When Sgt McCabe rightly raised concerns about low standards in An Garda Síochána, “several mistakes and failures to carry out duties were actually blamed on Maurice McCabe himself”, the judge noted.

“Maurice McCabe remains a public spirited, decent and kind individual but one suffering from the effects of strain. He is in the tribunal’s assessment someone who tries his very best to tell the truth as he sees it.”

Mr Justice Charleton said he agreed with the earlier observations of the O’Higgins Commission, which said that Sgt McCabe had been “never less than truthful in his evidence, even if prone to exaggeration at times.”

Mr Justice Charleton questioned why decent people, “of whom Maurice McCabe emerges as a paradigm”, were so shamefully treated when they rightly demanded that we do better.

Sgt McCabe, the judge said, was an ordinary human being “who can make mistakes and who at times is prone to grasp the wrong end of an issue. Because he is so intent on his task, and feels matters so deeply, at times he is not a completely reliable historian.”

However when his evidence was tested, in a conflict between his testimony and that of former head of the Garda Press Office, Supt Dave Taylor, there was a “clear preference” for the evidence of Sgt McCabe.

In his report the judge outlined how in November 2009, a website page appeared that featured an unpleasant rat by the name of “Maurice”.

“While this was derived from some kind of a public house mascot, it was far from a joke.”

He also said he was “driven to doubt bald assertions that fellow gardaí had no problems with Maurice McCabe. Some certainly did have problems with him.”

As Sgt McCabe rightly drew attention to policing standards, “talk against him began to grow. He came to be seen by a substantial minority of his fellow officers as a pariah and someone who was heedlessly causing trouble.”

Mr Justice Charleton said it had been unnerving that during the more than 100 days of evidence of the tribunal, a person who stood up for better standards in the national police force, and who exemplified hard work in his own calling, was repulsively denigrated for being no more than a “good citizen and police officer”.

“Within the pages of this report are detailed those women and men who have done their work well and who try every day, as police officers, social workers and administrators, to do their best. But not all. Not every person seeks either to uphold the highest standards or to strive for them through daily work.

“The question has to be asked as to why what is best, what demands hard work, is not the calling of every single person who takes on the job of service to Ireland.

“Worse still is the question of how it is that decent people, of whom Maurice McCabe emerges as a paradigm, are so shamefully treated when rightly they demand that we do better.”