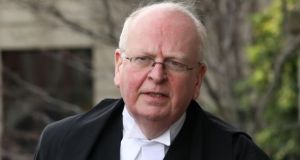 Senator Michael McDowell has spoken out against the prosecution of a British soldier for murder on Bloody Sunday 47 years ago. Photograph: Collins Courts

Former tánaiste and minister for justice, Senator Michael McDowell has spoken out against the prosecution of a British soldier for murder on Bloody Sunday 47 years ago.

Mr McDowell said he is “deeply uncomfortable” with the prosecution of the man, identified only as “Soldier F”, in relation to the massacre in Derry in 1972. The man is due to go on trial next year for the murder of two men and the attempted murder of four others.

There are people “standing in our halls of power and standing for office who perhaps did equal and far worse things than that paratrooper did on the orders or encouragement of superiors,” the former leader of the Progressive Democrats said.

Mr McDowell was addressing serving and retired Defence Forces Officers to mark the 25 years since the establishment of the Association of Retired and Commissioned Officers.

He said that in 1932, before Fianna Fáil entered government, all sensitive documentation in the State archives relating to the Civil War were burned by order of the acting defence minister.

There are perhaps occasions where it is better to draw a line under history, he said.

“Now in Northern Ireland there is a very, very strong case drawing the line under past history.”

Mr McDowell, a former Army reservist and a grandson of Irish revolutionary Eoin MacNeill, also said he believes there is a morale and retention crisis in the Defence Forces “which needs to be addressed”.

Ireland is “very vulnerable to a lot of things”, he said. “It is possible that from left field a threat will emerge that will require the Government to have a solid Defence Forces at its side.”

The Government must be “extremely careful” about keeping Defence Forces morale, recruitment and investment up to a realistic standard, Mr McDowell said.

He added that the Minister for Defence should be its own brief with a seat at cabinet to give the Defence forces “an avenue into the centre of Government.”

Taoiseach Leo Varadkar is currently Minister for Defence with Paul Kehoe serving as Minister of State and day-to-day head of the department.