New IRA says it has gained ‘lots of experience’ from Provos 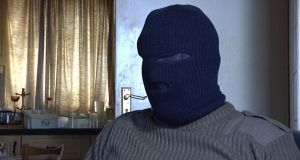 A spokesman for the New IRA, the organisation responsible for the murder in Derry earlier this year of the 29-year-old journalist, Lyra McKee, speaking on Channel 4 News. Photograph: Channel 4 News

The New IRA has said that it would consider attacking any Border infrastructure installed as a result of Brexit, and those manning such infrastructure.

A spokesman for the organisation responsible for the murder in Derry earlier this year of the 29-year-old journalist, Lyra McKee, also repeated an apology given at the time for the killing.

The interview was conducted by Channel 4 journalist Alex Thomson in a house in the Republic, and broadcast on Wednesday.

The man said that many of the members of his organisation had “lots of experience of the Provisional IRA, top to bottom” and that this gave it a “valuable insight”. However the majority of its members, he said, were “born after 1998”.

This would appear to indicate the majority of the membership of the small but violent group are aged 21 years or less.

Last month, The head of the Police Service of Northern Ireland (PSNI) said he was concerned that some more experienced terrorists were now involved with groups such as the New IRA, giving them an increased capability.

Chief Constable Simon Byrne asked for funding to recruit 800 officers to help deal with an increase in paramilitary activity in the region.

He noted the force had had to deal with more callouts and investigations of terrorist threats since he took up the role in July than his predecessor had faced in the previous year.

The unidentified New IRA interviewee said he was “authorised” to speak on behalf of the group’s “army council”.

Asked about the killing of McKee, the man said his organisation listened to calls from the republican base at the time, including the political organisation, Saoradh, which called for the organisation to take responsibility for the killing and to apologise.

“We directly apologised at the time to her partner, her family and her friends and on behalf of the IRA, I reiterate that apology now.”

Thomson said Sara Canning, McKee’s partner, had described the IRA as “paedophiles” in the sense that they groomed young and vulnerable people in deprived areas like Creggan.

“Personally, I find that comparison grotesque,”the spokesman said in response.

“Young people have always been the backbone of the republican struggle.”

He said there had been a border since 1921 and it had been resisted since then and was still being resisted.

“Whatever kind of border there is, be it soft or a so-called hard border - that’s irrelevant,” the man said.