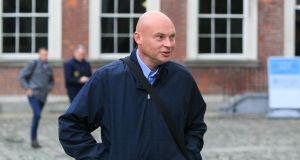 A garda whistleblower has accused a superintendent of “massaging” crime figures down and of trying to discredit him by undermining his work.

The Disclosures Tribunal is hearing from Garda Nicholas Keogh who alleges that a senior member of the Athlone drugs unit, identified to the tribunal as Garda A, was in an improper relationship with a heroin dealer, identified as Ms B.

The tribunal, which is investigating how the whistleblower was treated after he made a 2014 protected disclosure, heard that Garda Keogh believes four of his investigations were unjustly criticised by Supt Patrick Murray.

Garda Keogh maintains that his sergeants did not comment adversely and that it was “inconsistent and unreasonable” of Supt Murray to single him out for alleged policing deficiencies.

In his statement, Garda Keogh says his “police work was again irrationally scrutinised and minutely criticised by Pat Murray” and that “the queries from Supt Murray were oppressive and irrational”.

Supt Murray, in his statement, says “the queries I generated in this case were not in any way directed at Garda Keogh personally but were instead to ensure the investigation was carried out to a high standard”.

In the case of a robbery from a person in Athlone in August 2015, Garda Keogh states that he recorded it as such on the force’s Pulse computer system but it was subsequently downgraded.

Garda Keogh says in his statement: “[Supt] Pat Murray, who expressly classified the incident as ‘serious’ [in a letter to Garda Keogh], has simultaneously and self-contradictorily, declassified it on pulse on the very same day [September 23rd, 2015] as ‘not serious’, when he downgraded the robbery to ‘attention and complaints’ — in other words, to a non-crime.

“Supt Murray was — with only the inconvenience of self-contradiction — massaging the crime figures downwards while simultaneously increasing the importance of this same incident when he wanted to blame me.”

Supt Murray, in his statement, disputes the accusation, saying he was “not targeting Garda Keogh in any way.” In his letters to Garda Keogh, he criticised the lack of detail in crime reports and the manner in which statements were taken regarding two thefts, one criminal damage investigation and the robbery.

Garda Keogh said he made a detailed Pulse entry for the robbery, wrote in his report that the incident was “serious” and urged the attention of the detective branch, as he was going on leave.

When he returned to work he learned that the injured party did not want to pursue the incident. It was later re-classified downwards but Garda Keogh still received letters about his “scant” report, which “did not indicate investigative steps taken” in the case.

“All queries and questions were answered in detail on Pulse,” Garda Keogh told Judge Ryan. “I said it was a serious incident and that I was going on leave and requested the detective branch to look at it.”

He wrote a letter in response to the query of Supt Murray saying the criticisms were “nothing short of a form of harassment towards me”.

“If they didn’t look at Pulse then that’s negligence on their behalf,” he told the tribunal. “It was wrong and it should never have been re-classified.”

Diarmaid McGuinness SC, for the tribunal, put it to Garda Keogh that the investigation was re-classified as the injured party was not pursuing it and that Supt Murray felt it “the right thing to do”.

Mr McGuinness asked how the re-classification amounted to harassment or bullying of Garda Keogh.

“Then, there’s the ‘to-ing and fro-ing’ between the superintendent and myself [by letter].”

Garda Keogh told the judge that the re-classifications and the scrutiny his work received amounted to the “discrediting of my policing work”.

Tribunal chair Mr Justice Seán Ryan suggested that “fiddling” of crime figures might be what Garda Keogh was alleging, to which Garda Keogh said: “I’m not alleging corruption.”