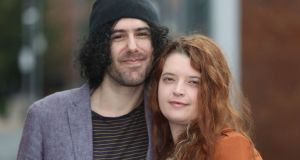 Emma DeSouza and her US born husband Jake arrive for a press conference in Belfast on Monday. Photograph: Niall Carson/PA Wire

The assertion that Irish citizens born in Northern Ireland are British makes a mockery of the Belfast Agreement’s equal citizenship and identity rights, a human rights expert has said.

The British Home Office won an appeal on Monday against an immigration tribunal case that had originally upheld Emma DeSouza from Co Derry’s right to declare herself as Irish, without first renouncing British citizenship.

On Monday, tribunal judges examining the case regarding her application for a residence card for her US-born husband Jake, said those born in Northern Ireland remain British citizens according to the law, even if they identify as Irish.

Una Boyd, an immigration project coordinator with the Committee for the Administration of Justice (CAJ) in Belfast said: “CAJ fully supports Emma and Jake in their case and we are disappointed and concerned by the Upper Tribunal decision.

“The right to British or Irish identity is recognised and ‘accordingly’ the right to either citizenship is confirmed in the Belfast Good Friday Agreement.

“The current Home Office position that all Irish citizens born in Northern Ireland are really British makes a mockery of the equal citizenship and identity rights which were central to the peace agreement.”

Ms De Souza has said she will take her case to the Court of Appeal in Belfast.

He urged the British and Irish governments to act on this matter, particularly as Brexit is making these issues “a lot more obvious and overt”.

“The UK need to consider amending the 1981 Nationality Act which wasn’t updated with the Good Friday Agreement of 1998,” he said. “There needs to be a joint treaty between the British and Irish governments to respect the choices of identity.”

He added: “In effect what the law is saying, notwithstanding what the GFA says, anyone who is born in the UK is automatically treated as a British citizen from day zero regardless of what your family history is.

“The UK government argues that nobody can be born stateless.

“In essence, people commonly understood you could be solely British, solely Irish or hold both citizenships.”

Dr Farry said the Common Travel Area (CTA) “doesn’t go far enough” in capturing these issues. “The governments need to work though all the anomalies that are coming to the fore,” he said.

Dr Farry, who personally identifies as Northern Irish, British, Irish, and European, said the tribunal ruling would have implications for a range of scenarios, including in the event of Irish unity.

“Say there was united Ireland; you would have the situation this would happen in reverse,” he said. “Someone from a solely British background would be deemed an Irish citizen from birth so particular care would need to be made to respect the choice to be solely British.”

“The Good Friday Agreement is crystal clear on this in terms of citizenship,” she said. “Emma De Souza is an Irish citizen and it is disgraceful that she should have to go to court to prove it.

She added: “Taoiseach Leo Varadkar told us that Irish citizens in the north will never again be left behind by an Irish government.

“The Irish Government now needs to step up and defend the rights of all Irish citizens.”

SDLP deputy leader Nichola Mallon it was “disgraceful that the British government has sought to undermine the principles of the agreement”.

“I will be raising this with the Secretary of State as a matter of urgency. The political outworking of the Good Friday Agreement and the principle that people born here can define as Irish must be upheld,” he said.

Mr Weir said “the issues of citizenship and identity should not be conflated”.

“Whilst identity reflects a political and cultural ethos, citizenship is legally based entitlement enshrined in legislation,” he said.

“Anyone in Northern Ireland can of course choose to take up Irish citizenship but this ruling clarifies that British citizenship is the automatic default.

“The principle of consent is a vital part of the progress we have made in Northern Ireland and the legal challenge taken by Mrs DeSouza would have undermined that principle.

“The way in which many nationalists championed this case has raised questions about whether they are truly committed to all aspects of the Belfast Agreement and will do more than simply pay lip service to the principle of consent.”