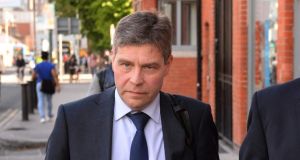 Vandalism to property owned by a brother of tortured Fermanagh businessman Kevin Lunney shows the intimidation of Quinn Industrial Holdings (QIH) executives “has not gone away”, a company spokesman has said.

The company made the remarks in response to reports that bales of silage owned by Mr Lunney’s brother Tony, a manager at the company formerly owned by local businessman Seán Quinn, were slashed.

Between 15 and 20 silage bales held in watertight black lining were slashed earlier this month in an attack on land owned by the Lunneys north of the Border in Co Fermanagh.

A source close to the family said they were more concerned about the continuing targeting of QIH executives than the cost of the damage on the farmland, which is estimated to run to hundreds of euro.

The company expressed concern that the eight-year campaign of intimidation against executives and property connected with the businesses lost by Mr Quinn in the financial crash had not ceased, even after the outcry that followed the abduction and sustained attack on Kevin Lunney, a QIH director.

Mr Quinn has disavowed the campaign and condemned the attack on Mr Lunney as “barbaric”.

In a statement, QIH, a building materials manufacturing company, said: “Continuing acts of intimidation and vandalism following the kidnap and torture of a QIH director show that this issue has not gone away and will never be resolved until the paymaster behind it is brought to justice.

“It is now incumbent on anyone with information or who may have seen suspicious activity to come forward to the authorities so that ordinary members of this community can work and live in this area free of criminality and intimidation.”

It was reported that the Garda was unaware of the vandalism attack against Mr Lunney’s silage bales, despite the incident having been reported to the PSNI.

The company’s statement echoes comments made by local Co Cavan priest Fr Oliver O’Reilly, who late last month condemned the “paymaster or paymasters” behind the attack on Mr Lunney during a scathing homily to parishioners at Our Lady of Lourdes Church in Ballyconnell near QIH premises.

Mr Lunney is still recovering from his attack and is said to be mostly housebound at present following his release from hospital last month.

An Garda Síochána and the PSNI are continuing to investigate the attack on Mr Lunney, who received knife wounds to his face, neck and chest and had one of his legs broken in two places.

He was abducted outside his home in Kinawley, Co Fermanagh, and dumped hours later on a roadside in Cornafean, Co Cavan, about a 40-minute drive away from where he was taken.