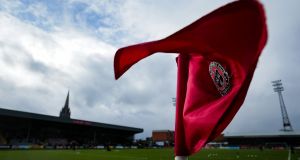 A man was taken to hospital to be treated for head injuries after clashes broke out in Phibsborough, Dublin on Saturday following a League of Ireland match between Bohemians and Shamrock Rovers at Dalymount Park. Photograph: Brian Reilly-Troy/Inpho.

A man was taken to hospital to be treated for head injuries after clashes broke out in Phibsborough, Dublin on Saturday following a League of Ireland match between Bohemians and Shamrock Rovers.

The Garda Public Order Unit attended the scene at around 5pm and while no arrests were made, an investigation is ongoing.

Shamrock Rovers won the game at Dalymount Park 1-0 after scoring a goal in injury time at the end of the second half.

“Gardaí have obtained CCTV footage and are following a definite line of enquiry,” a Garda spokesman said.

Videos posted online show a group of men fighting in the middle of Phibsborough Road, near the junction with Monck Place, while motorists waited in their cars.

A larger group of approximately 20 men can be seen advancing on a smaller group and lashing out at them. Many of the men in one of the videos are readily recognisable.

“A man, aged in his 40s, sustained head injuries and was taken to the Mater Hospital,” the Garda spokesman said. “The extent of his injuries are not known at this time.”

The Mater Hospital was unable to give an update on the man’s condition on Sunday.

Gardaí are appealing for anyone with information to contact Mountjoy Garda station on (01) 666 8602.