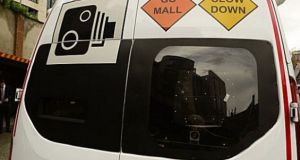 More than 1.5 million speeding tickets have been issued since the introduction of GoSafe speed cameras in November 2010. Photograph: Cyril Byrne

Speed cameras are being extended to 900 additional areas from next Monday.

While 903 new safety zones will be rolled out next week, 575 areas have been removed following a review, bringing the extra total of areas covered to 328.

An Garda Síochána said there will be a total of 1,322 safety cameras operating from 6am next Monday. In addition, 170 extra hand-held speed guns will be deployed to gardaí this month.

More than 1.5 million speeding tickets have been issued since the introduction of GoSafe speed cameras in November 2010.

“The safety cameras are proven lifesavers and only operate in areas which have a speed-related collision history where fatal, serious injury and now minor injury collisions occur,” he said.

“By identifying and targeting these high-risk areas our aim is to continue to reduce the number and severity of collisions, thus save more lives and prevent more injuries from occurring. This makes the roads safer for every road user.”

The location of the new safety zones – as well as existing ones – are available on the garda.ie website.

“Safety cameras have been in operation in this country for a decade now and are proven lifesavers. Deaths and injuries, as a result of speeding, in collision-prone zones where they are located have dropped,” she said.

“I welcome this review of locations by An Garda Síochána, which is based on speed-related crash data and I would remind people that the locations can be found on the Garda website.

“The locations are also being shared with satellite navigation companies. That’s because this whole project is about stopping people from speeding, not catching people speeding. So there really is no excuse.”

GoSafe is contracted to provide a minimum of 7,400 hours of speed enforcement and 100 hours of surveying per month as directed by An Garda Síochána.

GoSafe has completed over 800,000 hours of enforcement and checked over 248 million vehicles since 2010 to the end of last month. The GoSafe contract remains in place until May 2023.