Five arrested as cannabis valued at €289,000 seized in northwest

Properties in Ballaghaderreen, Charlestown and Clogherevagh raided as part of operation 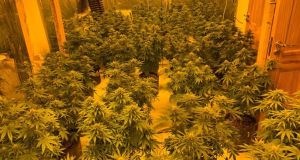 Five people have been arrested after gardaí seized cannabis worth an estimated €289,000 during searches at locations in counties Roscommon, Mayo and Sligo. Image: An Garda Síochána.

Five people have been arrested after gardaí seized cannabis worth an estimated €289,000 during searches at locations in counties Roscommon, Mayo and Sligo.

A Garda spokesman said two searches were carried out at separate properties in Ballaghaderreen, Co Roscommon. The first raid led to the discovery of 67 cannabis plants and cannabis herb valued at €54,000. Two men, aged 33 and 46, were arrested in connection with the haul.

A 41-year-old man was arrested at the second location in the town after some 2kg of the drug and 86 plants worth an estimated €107,000 were found.

A 26-year-old man was arrested at a crime scene in Charlestown in Co Mayo after 80 cannabis plants with an estimated value of €64,000 were identified.

A fourth search in Clogherevagh, Co Sligo led gardaí to uncover a further 80 cannabis plants with a potential valued of €64,000. A 49-year-old man was arrested at the scene.

The five men remain in custody and the operation, which aims to disrupt the sale and supply of cannabis in the northwest region, is ongoing.