‘They’re for the birds’: Council criticised for fining pensioner over feeding birds

‘I though it was disgraceful ... for just being kind to an animal’, says Limerick woman 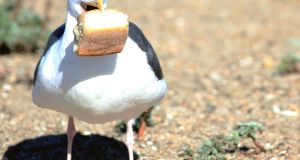 “I was walking along the bank near where I live and I was just feeding (seagulls) little bits of bread as I was walking, and this man came over to me and said ‘you know,you are not supposed to feed the birds, they cause rats’,” said Limerick woman Breda Moynihan. Photograph: iStock

A pensioner is facing prosecution for refusing to pay a “ridiculous” €150 fine for feeding birds near her home.

Breda Moynihan (70), who lives in Limerick’s Lee estate, said she was “absolutely stunned” when she received the penalty in the post under the Litter Pollution Act 1997.

She has been feeding birds “forever” at a green near her home and was approached by a council worker almost two weeks ago who reprimanded her, she said.

“I am a great animal lover,” said the grandmother.

“I was walking along the bank near where I live and I was just feeding (seagulls) little bits of bread as I was walking, and this man came over to me and said ‘you know,you are not supposed to feed the birds, they cause rats’.”

Ms Moynihan, who also feeds horses carrots and looks after stray cats, told the council worker the gulls swoop down to her and eat the bread up straight away.

“They know me,” she said of the birds.

She told RTÉ’s Today with Sean O’Rourke that she ignored the official’s rebuke and continued on before heading back home.

“I didn’t think much about it. He didn’t ask me for any information, any name or address. I went back to my home and he took off in his car, and that was it.”

But a few days later she received the fine in the post accusing her of “food throwing on a green area”.

“I was stunned really,” she said.

“I just didn’t take it in straight away. It is ridiculous. I though it was disgraceful and outrageous - for just being kind to an animal. Just being kind.”

Ms Moynihan said she would not be paying the fine. “I’m a pensioner so I wouldn’t have that money,” she added.

A spokesman for Limerick City Council told The Irish Times anyone refusing to pay a fine faces prosecution.

“There is a process there to appeal it,” he said.

“But anyone who doesn’t pay a fine can be prosecuted. It is part of the regulations.”

Former councillor John Gilligan, who has taken up Ms Moynihan’s plight, told the Limerick Leader she was the city’s “own Mary Poppins” and accused the council of persecuting the pensioner.