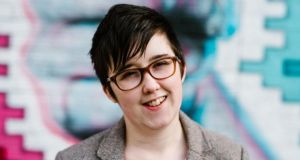 Four men have been arrested over the death of journalist Lyra McKee.

The 29-year-old writer was shot dead by a New IRA gunman in April last year while observing behind PSNI lines a riot in the Creggan in Derry.

In the weeks afterwards the dissident republican group the New IRA said its members carried out the killing.

The Police Service of Northern Ireland (PSNI) arrested the four men in Derry on Tuesday morning. The men were aged 20, 27, 29, and 52 years of age.

Officers arrested the four under the Terrorism Act, and the men have been taken to Musgrave Serious Crime Suite in Belfast for questioning.

PSNI Detective Superintendent Jason Murphy renewed a public appeal for any information connected to the murder of the young journalist.

“I have always believed that some people within the community know what happened and who was involved. I understand that people may be frightened to talk to us. I have previously given my personal assurance relating to anonymity for the purpose of this investigation and I renew this assurance today, as we approach the anniversary of Lyra’s murder,” he said.

“We saw widescale revulsion after Lyra was murdered and I remain determined to work with the community and local policing to convert that revulsion into tangible evidence to bring those who murdered Lyra to justice,” he said.

Det Supt Murphy appealed for mobile phone footage taken the night of the killing not previously shared with police to be passed on to the PSNI.

The four latest arrests come shortly after the family of Ms McKee complained to the Northern Police Ombudsman Marie Anderson about how the PSNI carried out a police search operation in Derry in advance of her killing.

During the search serious rioting broke out, and questions were raised at the time about whether the police were wise to mount a search operation in Creggan at night. Police were searching for guns and possible explosives in advance of Easter commemorations by dissident republicans in the city.

Last week the PSNI said the search was necessary for operational reasons aimed at targeting dissident republicans, in this case the New IRA who killed Ms McKee.