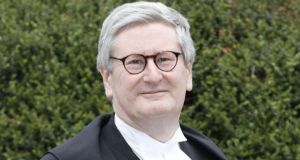 Supreme Court judge John McMenamin has called for legislation changing the eligibility limits for legal aid to be examined.

Delivering the annual Brian Lenihan memorial address in Trinity College Dublin on Saturday, he said changes to the income limits for accessing legal aid should be considered due to the high number of lay litigants and those without legal representation coming before the courts.

The memorial address is held to mark the contribution to Irish public life of the former Fianna Fáil minister for finance, who died in 2011, as well as to mark his connection to Trinity College’s law school as a student and later as a lecturer.

“You have this odd situation where if you’re very wealthy you’re fine,” Mr Justice McMenamin said, responding to a question from the floor from former minister for education Mary Hanafin.

He warned of issues to do with access to justice in the State. He said in some courts, especially the lower rungs of the family courts, up to one-third of cases featured one side which was not represented by lawyers.

“Every morning in the courts all over our country there are still left behind people [in terms of legal representation],” he said, often “litigants who suffered significant hits as a result of the recession”.

He said access to justice was a “fundamental building block of democracy itself”, and “not only makes for better law, but for better democracy”. He called for a multifaceted approach to addressing access to justice issues, including the promotion of pro-bono work, perhaps incentivised by tax breaks, as well as legislative reform and, most importantly, a “new initiative from all of us involved in the law”.

“We have to do it because we have to recreate trust, we have to make the system work better for all the people and ensure we take every step we can to avoid access to law being seen as the privileged reserve to the wealthy and powerful on the one hand . . . or the highly disadvantaged who may be eligible for legal aid and come within the present criteria,” he said.

‘Elephant in the room’

He said the cost of accessing the courts was the “awkward elephant in the room”.

He also spoke of the legacy and character of his friend Brian Lenihan, describing him as someone who was “political but never partisan”, and “always penetrating, always incisive”.

“He was an enemy of boredom in every way . . . he didn’t do boredom, he was the most stimulating person you could ever have come across,” he added.

He said that Mr Lenihan “had to make decisions that went very much against his instincts . . . but he was a man of great courage and he was a great patriot”. He was also a “practical intellectual [who] believed political ideas had to be tested on the anvil of political reality”.

Earlier this year, Mr Justice McMenamin represented the Association of Judges of Ireland (AJI) at a march in Warsaw, Poland, in solidarity with members of the judiciary in that country. He also conveyed a letter of support to the Polish judiciary from Chief Justice Frank Clarke, amid concerns that Polish court reforms failed to respect an independent judiciary.

In that letter, the Chief Justice wrote that “the independence of all of the judiciaries of the [European] Union is a matter of legitimate interest and concern to each of us”.

Speaking to The Irish Times following the march in January, Mr Justice McMenamin said it had been a “humbling experience, and startling to feel the level of public support.

“It was fairly unprecedented to have a procession of judges just saying: ‘Let judges do their job fairly and objectively.’”

He said the AJI had considered whether participating in the Warsaw march would mean the Irish judiciary had crossed a political line, but decided it had not.

He said there was a duty on all judges in EU member states to defend an independent judiciary, as this was fundamental to the rule of law which guarantees the legal integrity of the EU.