Dissident republican motive is ‘one of the lines of inquiry’, say police 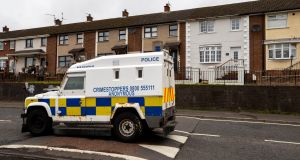 Lenadoon Avenue in west Belfast where a man was shot on Sunday evening, dying at the scene. Photograph: Liam McBurney/PA Wire

The 57-year-old man who was murdered in west Belfast on Sunday night was shot a number of times at close range in what police described as a “brutal killing” which was witnessed by two of the victim’s daughters.

The Police Service of Northern Ireland (PSNI) believe two gunmen were involved in the murder of Kieran Wylie, who was shot in a house in Lenadoon Avenue at around 10pm on Sunday.

They are investigating the potential involvement of dissident republicans in Mr Wylie’s killing.

“One of the lines of inquiry we are investigating is that there is a violent dissident republican motive towards this murder,” Detective Chief Inspector Darren McCartney told reporters at a press conference in Belfast on Monday.

It also emerged that Mr Wylie had been known to police and had been under threat from dissident republicans several years previously.

His murder was condemned by the North’s first minister, Arlene Foster, who spoke at the Executive’s daily coronavirus press conference of her “revulsion” at his killing.

“At a time when we’re trying to protect ourselves from the invisible threat of Covid-19 and our emergency services are working hard to deal with people’s concerns it’s particularly reprehensible that some people can callously take a person’s life and we urge anyone with any information that can help identify those responsible to assist the police with their investigation.”

Det Chief Insp McCartney said on Monday that despite efforts by neighbours and the emergency services to save him Mr Wylie was pronounced dead at the scene.

He said that two of Mr Wylie’s daughters, aged 16 and 28, had seen their father’s murder.

“The lifelong effect of what they witnessed last night are unimaginable,” he said.

The recovery of the gun used in the murder, he said, would be a “key line of enquiry.”

Det Chief Insp McCartney said a number of local residents tried to help Mr Wylie, and the community would be “rightly shocked at what has taken place in this residential area”.

Mr Wylie’s killers, he said, “selfishly gave no thought to the impact on frontline emergency services who are already working hard to keep people safe during this global pandemic with an already stretched resource.

“They also showed a complete disregard for the community,” he said.

“Those involved in this appalling murder offer nothing to the local community and need to be brought to justice.”

Det Chief Insp McCartney said the police investigation was at an early stage, and appealed for anyone who was in the area of Lenadoon Avenue between 9pm and 11pm on Sunday to contact detectives at Ladas Drive police station.

“We are particularly keen to recover CCTV, mobile phone and dash cam footage from the Lenadoon area last night and we want to speak to anyone who has any information about the incident or the events leading up to it,” he said.

A Major Incident Public Portal will be made available at https://mipp.police.uk where members of the public can upload images and video.

He said they were particularly angry that a man had been murdered during the coronavirus pandemic.

“Our health service are working tirelessly to ensure that we try to get to the other side of this uncertain time at the moment and yet there we have last night more pressure being put on our ambulance crew, our medical staff,” Mr Maskey said.

The North’s justice minister, Naomi Long, condemned Mr Wylie’s “senseless and brutal murder” and said it was “beyond comprension” that anyone would divert the emergency services from their duties at this “unprecedented” time.

Brian Heading, an SDLP councillor in west Belfast, said those responsible for this “senseless and cruel murder” were “thugs who need to get their foot off the neck of the community in West Belfast.

“They weren’t wanted in the past and they aren’t wanted now, particularly when our emergency services are working so hard to protect people from the impact of Covid-19,” he said.