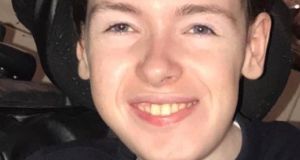 Glen McHugh Farrelly: “Salvation is just there and it’s just out of reach for whatever reason.”

It is almost a year since 18-year-old Glen McHugh Farrelly was approved for a drug treatment to treat a rare muscle-wasting disease, spinal muscular atrophy (SMA).

Eleven months on he has still not received the specialised quarterly medication Spinraza, the only treatment on the market, and his condition has deteriorated dramatically.

A clinic being established in Beaumont hospital that he was hoping to attend has been delayed because of the Covid-19 pandemic.

The health service faces a shortage of the specialised medical personnel needed in the administration of the treatment which involves injecting the drug into fluid surrounding the spinal cord through a needle inserted into the lower back.

The Maynooth University English literature student is currently cocooning with his family in Clondalkin, Dublin but is one of thousands of non-Covid patients missing out on treatment and his mobility has reduced considerably.

I know it’s an awful situation worldwide but treatment can’t stop or be withheld. People still need to be treated

He was 17-years-old when the State gave approval for the drug treatment for 25 children with the aggressive illness but only half have so far received the drug.

“Imagine if there was a cheque for €1 million and it was just diving out of reach,” he said. “That’s how it’s been for the past year. Salvation is just there and it’s just out of reach for whatever reason.”

As for the current state of his health, he said “when I first started college I could drive around campus no bother but now I can barely move”.

He uses an electric wheelchair but is now so debilitated that he cannot even push the control lever, the joystick, to move his wheelchair. But he trusts the medical authorities will deliver. “I do have faith in them”.

He adds: “I know it’s an awful situation worldwide but treatment can’t stop or be withheld. People still need to be treated.”

His mother Lisa McHugh Farrelly had hoped he would receive the treatment before the end of last year in Tallaght hospital. But the family was told that for him to get the drug administered quickly he would be referred to a new clinic in Beaumont hospital, where there were more of the specialised medical staff needed to administer it.

“Glen turned 18 in November and was in the position where he’s not fully paediatric but not fully adult either,” Ms McHugh Farrelly said.

“The whole point of the case for Spinraza was that they don’t have the luxury of time,” Ms McHugh Farrelly added.

The Beaumont clinic, scheduled to start in April, was delayed because of Covid-19 and had received no referral for Glen.

In a statement at the weekend the hospital said “outpatient department services generally are being re-established in June at Beaumont Hospital. Referrals on receipt will be prioritised and appointments will be issued accordingly”.

People Before Profit TD Gino Kenny, who has campaigned on the issue, said “it would appear that the money was made available for the drug, but hospitals did not have the staff available to administer it. It seems inordinately cruel to sanction the treatment but then not have the structures set up to ensure its delivery to all those who need it”.

The HSE estimated it would cost about €600,000 in the first year to treat each child and €380,000 a year thereafter, “with an estimated budget impact in excess of €20 million over a five-year period”.

Mr Kenny added that everyone understood the Covid-19 crisis was a priority but “we cannot abandon sick children and young people and leave them to suffer in the interim”.

The Department of Health said in a statement it appreciates the desire of families to begin treatment as soon as possible with this medicine. But it added that the “delivery of this drug to approved patients in a safe and sustainable way requires very specific and quite complex service arrangements to be put in place and recruitment is underway, as a matter of priority for a number of key positions in Temple Street”, where most of the children receive treatment.

The department will appoint a nursing co-ordinator for the service, who will liaise with families.