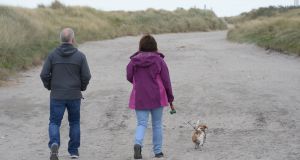 Dog walkers are set to be banned from parts of Bull Island and Dollymount Strand in north Dublin following “futile” efforts to encourage them to obey the rules of the protected nature reserve.

Dogs, particularly when let off the lead or on excessively long retractable leashes, are the “primary cause of disturbance for wildlife in the Nature Reserve” Dublin City Council said.

The council and the National Parks and Wildlife Service have “endeavoured to implement control measures over a number of years” by engaging park rangers and dog wardens to enforce the rules of the nature reserve.

However, in a report to be presented to councillors on Monday, the council said “this has proven futile” and has created “an unhealthy work environment for staff engaged in enforcement”.

In its 2020-2025 action plan for the nature reserve, the council is proposing strict controls, which would end access entirely to large parts of the island to dog owners, and walkers in general. In most other areas, particularly the dunes, dogs must be kept on a lead, while in one section of the beach, they will be allowed off the lead, but only outside bathing season, which runs from June 1st to September 15th.

“The single most important issue in relation to the disturbance of wildlife is the control of dogs. It is not the presence of dogs per se, rather it is the impact of dogs off-leash and access to sensitive habitats which is the key issue,” the council’ said.

A significant number of people using the island for exercise were doing so “without the realisation of the sensitive dynamics of the ecosystem in which they are recreating,” the council said.

“These are not irresponsible people. They just do not have a full appreciation and understanding of the sensitivities of this particular nature reserve.”

The most vulnerable areas were the northern end of the island, used by seals for breeding and resting; the shingle beach also at the northern end, where bird species ringed plover and terns breed and curlews feed, and which is regularly used by large concentrations of waterbirds for roosting at high tide; as well as the intertidal lagoons and salt marshes, which are used by birds all year round.

“The birds are accustomed to traffic and pedestrians using Causeway Road and footpath, but are particularly sensitive to people and dogs walking along the salt-marsh edge,” the council said.

“Ground-nesting birds such as skylarks, stonechats and meadow pipits breed throughout the sand dunes during summer. Dogs unleashed or on a long leash roaming beyond the existing trails disturb these species.”

The new rules would see access prohibited to the northern end of the island and beach, and along the salt marshes. Dog walkers will only be allowed on the dunes if dogs are on a lead at all times. Dogs would be allowed off the lead on a section of the beach at the southern end but only outside the bathing season. Councillors will be asked to approve the plan in the coming months.

Cars, banned from the island under Covid-19 restrictions, will be allowed back from Monday.