Nerves and excitement ahead of first wave of shop reopenings

As certain categories of shop reopen on Monday, retailers focus on safety measures 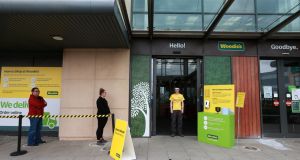 Staff at Woodies in Carrickmines demonstrate some of the measures being prepared for the shop’s reopening on Monday. Photograph: Laura Hutton

Never have so many waited so long for so few shops to open. While the green light for handpicked retailers to resume trading this morning will be met with relief by many and viewed as a tangible sign that the end of the beginning phase of the coronavirus crisis is within sight, there will be anxiety too.

A hardware shop or optician or bicycle shop opening on a Monday morning would not normally be greeted with excitement or require barriers, but it is a measure of how much our world has changed that tentative steps towards reopening Ireland have been met with palpable enthusiasm.

David Fitzsimons, chief executive of Retail Excellence, says today marks “the first steps on the road to recovery” and said retailers were “ingenious and resourceful” and had “invested great effort in planning for today to ensure they open safely for their customers and colleagues”.

He also stresses “the importance of our local independent stores” and encouraged consumers to use them “as we don’t want to lose them”.

One such retailer is Rachel Doyle, of the Arboretum Garden Heaven in Carlow and Kilquade, Co Wicklow. She says the company has “put a huge effort in to be ready” and bemoans a lost season of planting.

Many retailers have put in similar efforts, and the manner in which most have announced their return has been striking. Gone are the bold and brash promises of sales and special offers that would normally follow even the briefest of breaks from business-as-usual; instead retailers allowed to reopen have been boasting about the measures they will take to ensure customers can keep their distance from one another and stay safe.

Declan Ronayne, chief executive of Woodies, was not talking deals and discounts when he spoke on radio late last week, stressing that his company’s “primary focus when we reopen ... will be managing queues of people ... We have a steely determination to keep everyone as safe as we can.”

Ronayne said he was both nervous and excited to reopen after the seven-week closure, the longest Woodies has experienced since it opened its doors in the 1990s.

Barriers have been installed outside many of the larger DIY shops across the country to facilitate safer queuing, and staff will be policing the lines.

Even before Woodies restarted trading it was making headlines after announcing on Twitter that under-16s would not be allowed into the shops due to social-distancing concerns.

It later reversed the decision and said under-16s were welcome if accompanied by an adult.

“However, where possible, we would still encourage customers to shop on their own. We value all of our customers and do not want anyone to feel excluded and look forward to a day when family groups can again shop together.”

The move initially dismayed many solo parents of young children who risked being left behind as they could scarcely leave their children at home or with friends and family as they shop.

The lead-up to the tentative beginning of the end of the lockdown has seen missteps and there has been a degree of confusion and disappointment for some retailers left behind in the first wave.

Ikea announced last week it would be back in business today. Then, at the last minute, homeware shops were struck off the opening list, leaving the flatpack kings – and other shops that had been dusting off their soft furnishings – deflated.

Minister for Health Simon Harris was unapologetic, saying “now is not the time to decide I’m going to dicky up the house”.

The lifting of restrictions has been carefully managed and tweaked over fears that people will “descend on hardware stores and garden centres in large numbers”, which could result in a rise in rates of infection.

Harris has warned consumers they are facing the “biggest national test so far” and pointed out that “we have to find a way to live with this virus. There is no vaccine, there is no effective treatment. It has not gone away.”

He also dangles a carrot in front of housebound shoppers. “If we get this right, it means that every three weeks we can do a little bit more. If we get it wrong, our plans will stall and perhaps reverse. Crucially, [if this happens] it means that many people will die or get seriously ill in our country. Our public health behaviour now becomes more important than ever.”