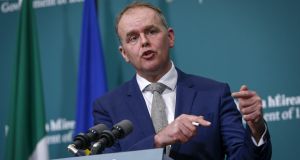 Minister for Education Joe McHugh has defended the process and says schools will award students’ grades and not the Department of Education. Photograph: Crispin Rodwell

Any attempt to offer teachers gifts or inducements in relation to students’ Leaving Cert results will be treated as a “serious attempt”to interfere with an entire school’s grades, under new Department of Education rules.

Department officials are finalising official guidance for teachers and schools over the use of calculated grades for students and it is likely to issue to teachers’ representatives in the middle of this week.

Unions have been pushing for a protocol to be included in the guidance which states that any inappropriate contact with teachers or schools will be formally recorded and forwarded to the department.

The draft guidance document is understood to state that parents or students must not under any circumstances contact, directly or indirectly, a teacher or other staff member to discuss estimated marks or class rankings.

“Such contact would be regarded as totally inappropriate and a serious attempt to interfere with the fairness and objectivity required of teachers and schools in the assigning of estimated marks and ranking for the individual student concerned and for the students in the school as a whole,” according to new department guidance.

It also states that any attempt by teachers to allow discussion of estimated grades before the process is complete would interfere with the process being carried out properly and fairly.

It says that if teachers discuss the marks with some students but not others, or if some teachers did this and others did not, these discussions might actually influence or be construed as influencing the mark the teacher submits to the subject alignment group.

Teachers’ Union of Ireland president Séamus Lahart said while calculated grades was not the preference of its members, teachers will work to implement them to the best of their ability.

“We’re working with other stakeholders to produce guidelines to enable teachers to do this as best as possible,” he said.

“We hope it will issue to teachers very soon. Our advice in the meantime is to wait until guidelines are issued before engaging in the process. When this happens, teachers will assign appropriate grades to students.”

The Labour Party, meanwhile, has written to the Irish Human Rights and Equality Commission urging it to investigate whether the use of “school profiling” in the use of calculated grades will penalise disadvantaged students.

This is a reference to the standardisation process that will occur when schools submit their calculated grades for students.

Under its official guidance, the department says estimated marks from each school will be adjusted to bring them into line with the “expected distribution” based on previous years.

Labour’s education spokesman Aodhán O Riordan said the use of this approach was “fundamentally unfair” and will impact on the capacity of some students to achieve their potential.

“This issue cannot be relegated to a mere political charge. It is appropriate that the commission assess the potential impact of this measure and make a statement accordingly.”

Minister for Education Joe McHugh has defended the process and said schools will award students’ grades and not the department.

He also said the calculated grades process will recognise achievement by students or classes in disadvantaged schools – such as an honours maths class in the school that was not there a year ago.

Mr McHugh said a standardisation process was needed to ensure there is fairness across the system.

In an interview with Bere Island Community Radio on Sunday, he said independent experts will also be appointed to ensure the department’s standardisation process is fair to all students.

He confirmed that guidelines for teachers are due to issue later this week and hoped Leaving Cert students will have their results in mid-August, or as “close to the traditional date as possible”.