Stephen Silver (43), with an address in Co Mayo, was remanded in custody 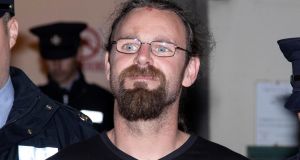 A man has appeared before a special late night court sitting charged with the murder of Det Gda Colm Horkan, who was shot to death in Castlerea, Co Roscommon.

Stephen Silver, a 43-year-old mechanic with an address at Aughavard, Foxford, Co Mayo, has been charged with the murder of the 49-year-old detective last Wednesday.

Gda Gillen, who was first on the scene in Castlerea along with Gda Aidan Fallon on Wednesday night, told the court that Mr Silver made no comment when the charge was put to him.

Mr Justice Mitchell ordered that any medical treatment required should be made available. He also instructed that the accused man should appear before the court next Friday via video link, with the agreement of Supt Goretti Sheridan and Mr Geraghty. Mr Justice Mitchell also granted a request for legal aid.

Mr Silver was brought to the court by gardaí in a Garda van and was walked into the court just after 10.30pm.

As the brief court hearing proceeded, Mr Silver had his head bowed and in his hands and arms before addressing the judge as the hearing was almost concluded.

“Absolutely unreal, unreal, I had no firearm on me,” he said aloud in the court. Mr Justice Mitchell told him he was legally represented and that anything he wanted to say could be relayed to his solicitor Mr Geraghty, who could then raise it with the court.

Det Gda Horkan, who was based in Castlerea Garda station, died at the junction of Main Street and St Patrick Street in Castlerea just before midnight last Wednesday.