Garda was in Templemore at the same time as Adrian Donohue 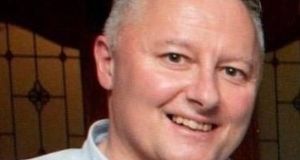 Detective Garda Colm Horkan, nicknamed Bear, was described by sources on Thursday as the “quintessential local guard” and a “pure GAA man”.

The Mayo man joined the Garda in 1994 and was in the Garda College in Templemore at the same time as Adrian Donohue. It is understood the two men sometimes sat within three seats of each other in class.

Detective Garda Donohue would be shot dead in 2013 in a Credit Union robbery in Louth, becoming the 87th garda to be killed in the line of duty.

Seven years later Det Gda Horkan became the 89th when he was shot to death on a Castlerea street on Thursday morning at the age of 49.

In between was the death of Gda Tony Golden, shot dead while responding to a domestic violence incident in 2015. Like Colm, Tony was a Mayo man. Like Adrian, he was murdered in Louth.

The shooting took place near the Garda station after the detective stopped his car and a scuffle ensued with a man, during which the man took control of the detective’s weapon and shot him. A man was arrested and is being held for questioning in Castlerea Garda station. Det Garda Horkan was left critically injured at the scene and found by colleagues in a passing patrol car.

Colm had a twin sister, Collette who died from cancer several years ago, as well as another sister and four brothers.

He lived with his father Marty just outside Charlestown in Mayo and commuted to his station in Ballaghaderreen, Co Roscommon in the Castlerea District.

His family are heavily involved in all aspects of life in Charlestown and at one stage they owned a pub in the town. Today, Colm’s brother runs a funeral directors there while their father continues to operate a taxi business.

Outside of the Garda, Colm’s life revolved around the GAA club where his football style earned him the nickname “Bear.”

“Charlestown Sarsfields GAA Club have been left devastated by the untimely and tragic death of our friend and brother, Colm Horkan,” the club said in a statement on Thursday.

“Colm and his family are synonymous with our club and Gaelic games within Mayo, a very dark cloud hangs over Fr O’Hara Park and our entire community today.”

Colm was also involved in various forms of charity work; his Facebook page is a list of fundraising appeals for causes such as suicide awareness and the Mater Hospital. Other posts implore his followers to abide by the coronavirus regulations to save lives.

Colm was a “very, very well reputed fellow. I know that can sound a bit trite but that is exactly what everyone is telling us verbatim.” said a spokesman for the Garda Representative Association. (GRA).

Another colleague called Colm “a brilliant local garda, the quintessential local country garda. Always there for any problem big or small.”

Colm spent most of his career in uniform in a community facing role. The difficulties of that job came to light last year when he gave evidence before a Coroner’s Court of finding a woman’s body in her home in Castlerea after she had lain undiscovered for more than six weeks. Colm and two others broke down the door of the woman’s house after no one had seen her for several months.

He had only been assigned to plain clothes duty a few weeks ago, meaning, for the first time, he carried a firearm on duty for protection. He had been assigned to conduct anti-crime patrols around Castlerea.

“Solid,” was how Mayo Garda Ronan O’Grady described Colm, who he knew both inside and outside the job. “Everyone in Charlestown loved him. He’d be kind of a community leader there.”

“The garda community are in deep shock. A lot of guards would have known Colm very well through the GAA and through work. He was deeply, deeply respected.

“I got to know him 22 years ago when I joined the guards through a couple of Charlestown lads. He was always looking out for lads. You couldn’t say anything wrong about Colm. An absolute gentleman.”

As a garda he preferred the gentle approach,” Gda O’Grady said. “He was always keeping an eye on lads if they were out for the night. Making sure they wouldn’t do anything foolish.”

“And he was a great Mayo supporter. I met him last year in New York, he was over for the Mayo Match,” Gda O’Grady said.

Garda Commissioner Drew Harris said Colm “served the communities he worked in with distinction and pride during his 24 years as a member of An Garda Síochána”.

“My thoughts, and the thoughts of all personnel in An Garda Síochána, are with the family, friends and colleagues of Detective Garda Colm Horkan at Castlerea Garda Station and the Detective Unit he served in.

“Det Garda Colm Horkan is the 89th member of An Garda Síochána killed in the line of duty. Today is a terrible reminder of the significant sacrifices, including the ultimate sacrifice, that gardaí make to keep people save,” Mr Harris said.

President Michael D Higgins said the death of the garda detective has “come as a shock to us all”.

“As President of Ireland I wish to express my deepest sympathy to the family and friends of the Garda, and to all those who have been affected by this tragedy,” Mr Higgins said.

Taoiseach Leo Varadkar also extended his sympathies to the family and friends of the garda detective.

“Every day our gardaí put themselves on the frontline of crime prevention, on behalf of all of us,” Mr Varadkar said.

“This requires regular acts of bravery and courage. Sometimes the outcome is tragic and a Garda makes the ultimate sacrifice in the course of their duties.”