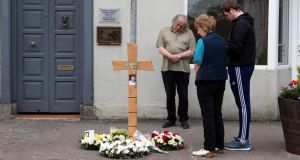 People pray at a cross erected on Friday at the scene of the killing of Det Garda Colm Horkan in Castlerea, Co Roscommon. Photograph: Colin Keegan/Collins

A wet patch of road on Main Street in Castlerea, Co Roscommon, yesterday marked the spot where Det Garda Colm Horkan had been gunned down late on Wednesday night. The scene had been cleansed before the town was reopened yesterday at about 3.30pm but the evidence of what happened there, on a T junction where Main Street meets St Patrick’s Street, were clear to see.

A bullet hole marked the wall beside the front door of Mulligan Menswear. Across the road the front window of Gannon Travel had been broken by another bullet, while on the third side of the junction another bullet hole was clear to see in a steel fence beside Boyle’s dental surgery.

John Mulligan, the owner of Mulligan Menswear, told The Irish Times of his “absolute shock” that Det Garda Horkan had been shot dead right outside his business.

“Nobody could believe what had happened. We’re a small quiet, rural town and to have something like this go on...,” he said.

“At the start, word went out on Wednesday night that there were shots down town and then 10 minutes later we heard somebody was injured. Then there was speculation it was some guy buying drugs off a dealer or something and got shot. It was really only the next morning that we heard that a garda was shot.

“And then you realise it’s a man who had been working in the town for years, and that it was outside our front door; that a guard was shot and there’s a bullet hole on our front wall... it’s just terrible. God, when you think if it, a man went out to work and he never went home.”

Mr Mulligan’s family business was started by his father back in 1968 and only once in the half century since then has anything remotely as serious impacted the area.

On July 7th, 1980, Garda Henry Byrne and Det Garda John Morley, who were based in Castlerea, were shot dead when they were responding to an INLA bank robbery in Ballaghaderreen, Co Roscommon.

Paul Gaynor, a funeral director from Castlerea, spoke to The Irish Times as he brought floral tributes from local people and businesses to a wooden cross that had been erected to mark the spot where Det Garda Horkan had died.

“Getting flowers to put here for him and for the guards generally is important to people, it has meaning and it gives people a sense that they are doing something good for the family.”

He added that the nature of the killing and the fact the victim was so well liked had combined to create immense shock.

“Colm was a nice, easygoing and respectful man,” he said of the deceased detective, whom he met frequently as their paths crossed regularly due to their occupations.

“He always went the extra mile to look after people. Even if it went over his time on duty, he’d spare an hour or two to stay on and help somebody out. He was also good at reading people, he had a lot of experience and whatever happened he wasn’t expecting it.

“He’s been known around here for 20 years because he worked here and in Ballaghaderreen which is the same [Garda] district. We’ve seen nothing like this for 40 years.”