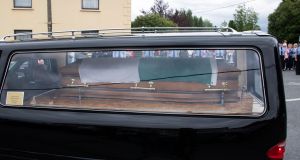 Colm Horkan was the 35th garda killed by gunfire since the foundation of An Garda Síochána in 1922, a figure which includes two incidents of friendly fire and one garda killed while on United Nations duty in Bosnia Herzegovina.

But he was the first garda to be killed in what Americans call a “take-away” shooting, where an officer is killed with their own firearm.

In this sense Garda Commissioner Drew Harris was exactly right when he characterised the shooting as an anomaly, “an aberration”, on Thursday.

Take-away shootings are extremely rare even in countries with high rates of gun violence; in the US an average of four such incidents occur every year.

Just because an event is rare does not mean lessons cannot be learned, however. Examination of the incident which occurred just before midnight on Wednesday on the main street in Castlerea, Co Roscommon, is likely to focus on two areas: should Det Garda Horkan have been patrolling alone and could different equipment have led to a different outcome.

Police doctrine states that in most cases two-person patrols are best practice. This allows officers to employ a tactic called “contact and cover” where one officer engages with a suspect while the other observes.

Rank-and-file gardaí are not taught contact-and-cover tactics and in many cases personnel restrictions mean two-officer patrols are not feasible. This is especially true for rural areas where single Garda patrols, such as the one undertaken by Det Garda Horkan on Wednesday night, are the norm.

According to Sheelagh Brady, the founder of security analysts SAR Consultancy and a former Garda sergeant, there are several factors which inform how many people should be on a patrol.

One is the level of danger the officers might face. “What should inform your numbers is the risk in the area you on patrolling, either on foot or by car. It’s based on your risk assessment.”

The other is how far the patrol will be from back-up. In urban areas, where a back-up car is often only a minute or two away, single-person patrols can be acceptable. In rural areas where the patrol may be going farther from the Garda station there should be two.

Sometimes single-person patrols are preferable as they allow for greater Garda visibility and the ability to cover more ground, Ms Brady said, before stressing that more detail would have to come out before such any definitive assessment could be made of the Castlerea shooting.

Questions will also be asked about how the suspect got hold of the detective’s gun in the first place. We do not know, and may never know, exactly what happened. Det Garda Horkan was wearing a simple leather holster with a buttoned strap on top. It allows for easy access to the weapon in emergencies but it is also prone to coming undone in an altercation.

In recent years some armed gardaí have taken to buying their own holsters online or while on holiday in the US; there’s even a gun store in New York which offers a discount to gardaí. These tactical holsters usually feature a safety switch which prevents the weapon being removed by anyone except the user.

However, unhappiness with the standard equipment does not seem to be a major issue. According go a GRA spokesman, it has never received a complaint about the holsters.

But he added said the association “would anticipate that matter will be considered” during the review of the incident promised by the Commissioner.