Laws should be strengthened to protect prison officers, says Minister

‘Criminals have one thing on their mind, to break the law, whether in prison or outside’ 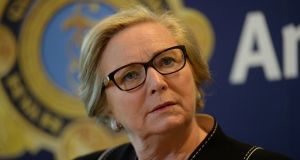 Minister for Justice Frances Fitzgerald said she is looking at ways of bringing in new legislation aimed at protecting those working in the frontline such as gardaí, prison officers and fire crews.

Ms Fitzgerald, speaking in Galway where she addressed the Prison Officers Association (POA) annual conference, said those who protect us need their own safety to be secure and there should be stringent penalties for assaults on them.

“Any assault should be pursued with the full rigour of the law and sanctions have to apply. I absolutely believe that if there is an assault on a prison officer, that should be consequences, there has be consequences. But equally we have to ensure that the gardaí are involved, and there is full prosecution.”

She added prison officers are dealing with “the most dangerous people in the country”.

When asked about mandatory sentencecs for such assaulats, Ms Fitzgerald said she was looking at all aspects of making it safer for people in the frontline to carry out their duties without fear of attack.

“I am examining the legislation to see if we can strengthen the protection for workers. There is specific legislation in place but I do believe that assault against a person, who is an emergency situation, or is going out to ensure the safety of our citizens, that they do deserve special recognition in our legislation.

“It [legislation] is there, but the particular sections aren’t used very much. I am examining how we can strengthen that and recognise the very key role that all of these workers, these individuals including prison officers play in our society,” she said.

She said that dealing with criminal gangs was an ongoing battle.

“If you have to deal with gangs outside in society you will get that reflected in our prisons. It is an increasing challenge both for prison officers and for the authorities but make no mistake it’s dealt with very seriously.

“Criminals have one thing on their mind, to break the law, whether they are in prison or outside of prison they will do everything to increase their power. It is a relentless war against them,” she added.

She said prison officers need to be protected and we need to ensure that if there are any assaults that there are sanctions. “They are dealing with the most dangerous people in the country,” she said.