Prison officers: ‘Nobody goes in expecting to lock up Teletubbies’ 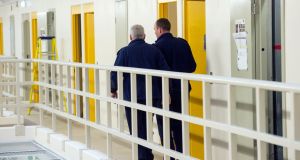 Prison officers want more equipment such as riot gear, batons and pepper spray to protect themselves from assault and injury at work.

President of the Prison Officers Association (POA), Stephen Delaney, said on Thursday work conditions for prison staff were getting worse and he had “grave reservations” about the safety of officers while at work.

Reduced staff numbers and inadequate resources for equipment have led to an increased number of assaults on prison officers by inmates, he said.

“Nobody goes into this job thinking that they’re going to be locking up the Teletubbies,” claimed the deputy president of the Prison Officers Association (POA).

Jim Mitchell says that prison officers have one of the most difficult jobs in the civil service.

He said that it is very difficult to be proactive in the job when adequate resources were not available.

“We have supported every rehabilitative process. It is part of what we do.”

When asked about absenteeism in the job, he said that they don’t recognise the term. He said that compared to other jobs “the stress level does take its toll”.

He admitted that the rate of sick leave among prison officers is higher than among other civil servants, but was reluctant to generalise.

He pointed out prison officers were only allowed to carry batons in extreme circumstances, rather than at all times. This was not a deterrent, he said.

Mr Delaney said there had been numerous examples of assailants not being convicted for assaulting prison officers and the POA is calling for tougher legislation to deal with the problem.

In many cases there is no penalty for prisoners who assault a prison officer. Mr Delaney said the POA supported calls by the gardaí for tougher legislation and mandatory sentencing for such offences.

He said staffing levels in the Prison Service were already down 250 and a further 150 prison officers were due to retire this year, but the recruitment process will not be able to replace them.

Minister for Justice Frances Fitzgerald will attend the conference today.