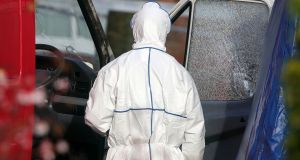 Gardaí examine a van with bullet holes in the windscreen and side window pictured this morning at the scene of the fatal shooting of a man in Glen Easton Park, Leixlip, Co. Kildare last night..Picture Colin Keegan, Collins Dublin. 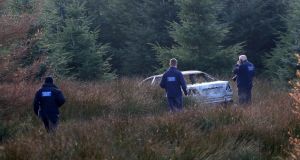 One of the suspected getaway vehicles used by the gunmen who killed Clive Staunton in Co Kildare last night is seen at Ballyfolan in the Wicklow Mountains. Photograph: Collins 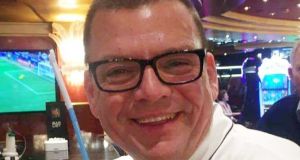 Clive Staunton who was shot dead in Leixlip on Thursday. Photograph: via Facebook

The murder of Clive Staunton in a gun attack outside his home this week marked the end of a near year-long lull in the Kinahan-Hutch feud.

Staunton (50) was getting out of his car on the Glen Easton Way housing estate in Leixlip, Co Kildare at about 9.15pm on Thursday when he was shot in the head.

The widowed father of one was a street trader, originally from Dublin’s north inner city, who had lived in Co Kildare for years. He appears to have been targeted simply because he is linked to the Hutch family.

His is the nineteenth murder linked to the Kinahan-Hutch feud since the dispute began with the killing of Gary Hutch (34) in Spain in September, 2015.

Gary Hutch, a nephew of the suspected armed robber Gerry Hutch, known as The Monk, had fallen out with the leadership of the Kinahan cartel.

When Gary Hutch tried to shoot one of the Kinahans and missed, wounding another man instead, his life was immediately in danger.

Paid €200,000 in cash In the months that followed, his family in Dublin believed they had negotiated a deal that spared his life in exchange for the payment of €200,000 in cash to the Kinahans.

However, when Gary Hutch returned to live in Spain, believing the threat against him had been lifted, he was shot and killed by the Kinahan cartel.

Since then the cartel, driven by its Dublin-based faction, has waged war against the Hutch family and their associates.

The bloodiest period of the feud was 2016 when nine men were shot dead. An unprecedented Garda clampdown on the gang members has largely quelled the violence.

However, sporadic killings continued since.

This year began ominously for gardaí and the communities on whose streets the violence - always savage and often indiscriminate - has unfolded for the last three years.

Derek Coakley Hutch was shot dead on January 20th, just six weeks after Kane McCormack was murdered around the one-year anniversary of his father Noel Kirwan’s murder, as part of the feud.

Derek Coakley Hutch’s murder in January was of particular concern to gardaí for a number of reasons.

Last year saw two gun killings as part of the feud. Michael Keogh was shot dead outside his north inner city home as he got into his car to drive to work on May.

In December Kane McCormack was abducted, shot dead and his body dumped in a field in Co Meath.

When Derek Coakley Hutch’s murder occurred in January it looked as if the killings were accelerating.

Derek Coakley Hutch was also not a gangland figure. He worked hard to overcome a drug habit and to get his life back on track; winning praise from a judge for doing so.

He was, however, throwing drugs to his brother over the exercise yard wall into Cloverhill Prison, Clondalkin when he was fatally shot.

Before Derek Coakley Hutch was buried, another man on the Hutch side was killed.

Jason Molyneux, a 27-year-old father of one, was shot dead outside James Larkin House, a north inner city flats complex, at 9.45pm on January 30th.

He was returning from attending his friend Derek Coakley-Hutch’s wake when he was shot dead.

This death, the third killing in two months, suggested the feud had returned to the intense violence of 2016; when a group gun attack at the Regency Hotel in north Dublin began one of the most intense killing sprees within Dublin’s crime gangs.

Since then there have been a series of successes for gardaí. Huge quantities of drugs and cash have been seized this year from the feuding gangs, and a large number of weapons has been seized.

New Garda Commissioner Drew Harris has spoken about the need to “degrade” the capability of organised crime groups and domestic terror organisations on both sides of the border.

This means constantly targeting these organisations by seizing their resources and jailing them, so even if some criminal gangs or terrorist groups continue to exist, their ability to strike is minimised.

The leaders of the Kinahan gang remain living overseas, in Spain and Dubai, from where they continue to supply the Irish drugs market.

However, the Dublin-based group running the Kinahan cartel’s Irish operation for years has seen its capability degraded. It lost David Byrne when he was shot dead in the Regency attack in 2016. And this year Freddie Thompson was jailed for life for the feud murder of David Douglas in 2016.

Thompson’s jailing represented a major blow for the Kinahan cartel’s killing capabilities on the streets of Dublin as he planned many of the gang’s fatal shootings.

Other members of the Kinahan cartel’s Dublin-based members are on remand in prison awaiting trial on serious charges.

Because that group has lost a number of key personnel, and also seen its car businesses targeted by Cab and assets confiscated; many of its members who remain at liberty are now spending more time abroad.

The Hutch side of the feud never had the same capability as the Kinahans. The feud has always effectively been an attempted wipe-out of the north Dublin criminals and their associates by the most powerful and wealthiest gang Irish organised crime has produced.

Teenager had gone to London with €2,000 to organise drug deal from the United States