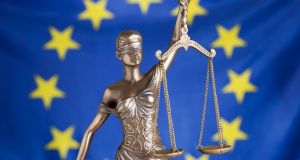 One case centres on a Lithuanian warrant for Rustan Riabov, who is being held in an Irish jail pending trial for nine offences Photograph: iStock

Legal doubts in the Irish courts over the European Arrest Warrant (EWA) system are holding up the transfer of suspects wanted in other European states.

The case centres on a Lithuanian warrant for Rustan Riabov, who is being held in an Irish jail pending trial for nine offences including swindling, theft, and robbery.

Because of Mr Riabov’s imprisonment, the High Court has asked the CJEU to expedite the hearing of the issue.

Ms Justice Donnelly is currently also involved in considering the handing over of a Polish national Artur Celmer to Warsaw, following a ruling by the EU court on questions from her as to whether, given the threat in Poland to the independence of the judiciary, he could receive a fair trial.

The CJEU advised that the Irish High Court has to establish not only a threat to the independence of the courts, but one that would specifically adversely impact on Celmer’s case if it is to refuse to execute the Polish warrant.

That examination is under way.

Technically, what the court is considering is not an extradition request but a decision for the court to allow the Polish arrest warrant (EWA) to be enforced in Ireland.

In the Riabov case, Ms Justice Donnelly asked the CJEU to answer whether the Lithuanian authority requesting the warrant’s execution, the Prosecutor General’s Office, is a valid and therefore competent “issuing judicial authority” under the terms of the 2002 EU legislation establishing the EWA.

The referral to Luxembourg follows two similar applications from the Irish Supreme Court in June on the same issue. Both have yet to be heard by the court.

Because they did not involve prisoners in custody, the CJEU declined to accept the Irish court’s urgency request in these cases.

As part of the process of seeking clarification from the CJEU, Ms Justice Donnelly asks questions of the court and then suggests her preferred answers.

Among the questions Ms Justice Donnelly asked the CJEU is one similar to issues she raised in the Polish case - whether the prosecutor’s office “is not independent of the executive of that country to a sufficient extent to properly qualify as a ‘judicial authority’”.

These issues had been raised by Mr Riabov’s legal team.

Ms Justice Donnelly suggests the CJEU should accept the prosecutor is indeed independent of the executive on which she says there is “no doubt or controversy” .

Ms Justice Donnelly also argues the CJEU should find its “role in the pre-trial investigation procedure amounts to participation in the administration of justice such to satisfy the Court that the prosecutor is a judicial authority.”

If the court does so, there will be no legal impediment to the execution of the Lithuanian warrants.