Conviction rates for rape and sexual offences are the lowest in the UK, CJINI study finds 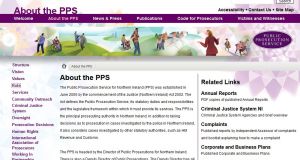 Report found it was sometimes taking the Public Prosecution Service more than a year to decide whether to proceed with a charge, a time-frame described as ‘simply unacceptable’.

Faced with lengthy delays, an intrusive court process and a low chance of securing a conviction, a “high” number of complainants are choosing to withdraw their evidence rather than proceed with their case, Criminal Justice Inspection Northern Ireland said.

Inspectors expressed concern that while 823 alleged rapes were reported to police in 2016/17, in that same 12 month period there were only 15 convictions for the crime, less than 2 per cent.

Of the 2,335 other alleged sexual crimes reported that year, a total of 228 defendants were convicted, less than 10 per cent.

The conviction rates for rape and sexual offences are the lowest in the UK, the CJINI said.

Chief inspector Brendan McGuigan said the Public Prosecution Service (PPS) was sometimes taking more than a year to decide whether to proceed with a charge, a time-frame he branded “simply unacceptable”.

“This report concludes that the criminal justice processes in Northern Ireland for handling these cases take too long, are too expensive and conclude with, all too often, a failure to deliver an acceptable outcome for victims,” he said.

A retired appeal court judge is currently reviewing how sexual offence trials are handled in the region.

Sir John Gillen’s work was prompted by a number of issues highlighted during this year’s high profile rape trial of former Ulster and Ireland rugby players Paddy Jackson and Stuart Olding, who were acquitted of raping the same woman in 2016.

The CJINI inspection is not linked to the Jackson and Olding trial and was under way before that case came to court.

The inspectors do not examine how trials are conducted, as that is outside their remit, rather how cases are progressed and built in the period before they reach the door of the courtroom.

“Inspectors found that while there were many dedicated and professional individuals involved in dealing with incidents of sexual violence and abuse, delay was a substantial problem,” said Mr McGuigan.

“It occurred from when the initial police investigation and file preparation was undertaken, through the time taken by prosecutors to review the case and make a decision to prosecute or not, and afterwards in the number of adjournments at court before a trial commenced.”

The report, which makes three strategic and six operational recommendations, outlined a number of case studies inspectors felt highlighted issues of concern within the system.

- A woman walked into a police station to allege she had been drugged, raped and forced to carry our explicit sex acts while being videoed by her husband. She alleged other men were brought into the house to rape her and that her husband tried to blackmail her so he would not share the footage.

After the initial report, it took three weeks for an investigating officer to contact the woman to arrange an appointment. It would be another three months before the officer made contact again. Four days later she withdrew her evidence. A no prosecution was later directed.

- A foreign national woman alleged she was tied up and raped by her partner. She had suffered a broken eye socket and ligament tears to her eyeball and significant internal injuries caused by the alleged rape. The woman claimed her partner had assaulted other women in his home country.

The woman withdrew her support for the prosecution on a number of occasions. The PPS ultimately accepted a lesser assault charge from the defendant. Inspectors criticised the decision and said the rape charge should have been pursued in the public interest, even by compelling the complainant to give evidence.

Mr McGuigan said police and prosecutors had made progress in developing a more collaborative approach to work together to progress cases.

“But from the outset, their ability to deliver improved outcomes and reduce delay has been hampered by challenges around securing sufficient staff and managing their ever increasing workload,” he said.

The chief inspector added: “Inspectors also found examples in their case file review where some PPS decisions on sexual offences exceeded one year which in our view was simply unacceptable.”

“Victims who experience delay in the overall progress of their case can choose to withdraw their support for the criminal justice process,” he said.

“And for some, the prospect of an adversarial, highly intrusive trial where their intimate behaviours will be scrutinised and challenged, with only a very limited prospect of securing a conviction, may cause them to reconsider.”

“The result is that time and time again victims of sexual crime in particular are being failed,” he said.

Mr McGuigan, whose report is to be considered by a Stormont all-party group on domestic and sexual violence, said it was time for a wider societal debate on the issue.

“This inspection and recent public debate about rape cases has raised wider issues about the societal approach to sexual relationships, consent and the media attention on cases which come to trial,” he said.

“There is more to be done to prevent these offences occurring in the first place by providing better education for children and young people about healthy relationships, changing societal behaviours and attitudes and early interventions for those at risk.

“I believe the time is right for a more informed political and public debate on the role of the justice system in dealing with these complex issues.”

Responding to the report, assistant director of the Public Prosecution Service, Marianne O’Kane, said: “ We very much understand that the rigour and robustness of the system can be difficult from a victim’s perspective, and this is particularly true of those who are a victim of a sexual crime.” - PA