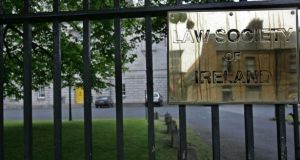 Cork solicitor Patrick Dorgan has been appointed as the new president of the Law Society.

Mr Dorgan, who specialises in property law at the firm Ronan Daly Jermyn, will serve as the head of the society, which acts as the representative and regulatory body for Irish solicitors, for the next 12 months. He is the society’s 148th president.

“It is a great honour to be elected president of the Law Society of Ireland at a time when there are over 18,000 names on the roll of solicitors. The profession is growing rapidly, with nearly 1,000 solicitors added to the roll last year,” said Mr Dorgan.

He said he will use his term to focus on diversity and inclusion within the profession. In 2015 Ireland became the first country in the world to achieve gender parity among its legal professionals, he noted.

“We are now looking ahead and one of my priorities as president will be to build on that achievement and further develop the strong policy of diversity and inclusion that is already at the core of the profession’s values,” Mr Dorgan said.

He said challenges related to Brexit, political change in Europe and developing technology provide opportunities for solicitors to thrive. He said the modern solicitor’s profession “is younger, more diverse, more tech savvy and generally more switched on to what business and consumers need from their lawyers than ever before”.