Fatal shooting of man in Kildare linked to Kinahan-Hutch feud 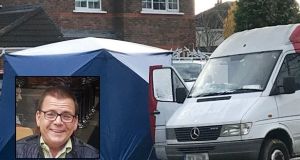 Gardaí at the scene of the fatal shooting in Leixlip of Clive Staunton (inset). Photographs: PA and Facebook 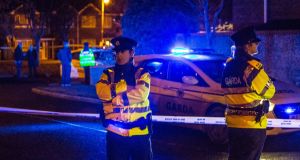 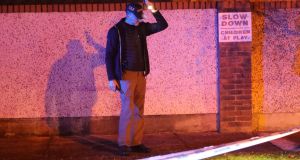 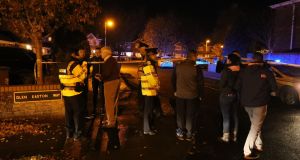 Gardaí are appealing for dash cam footage in relation to the murder of a 50-year-old man outside his home in Co Kildare on Thursday night, which they believe is the latest killing in the Kinahan-Hutch feud.
Clive Staunton (50), a father-of-one and widower, was shot dead in the Glen Easton housing estate in Leixlip at around 9.15pm. Mr Staunton was returning home from the Republic of Ireland’s soccer match at the Aviva stadium in Dublin, where he was working as a street trader.
Garda sources said Mr Staunton was shot in the head. Gardaí and emergency services were notified immediately but Mr Staunton was pronounced dead a short time later.
Originally from the north inner city, one line of Garda inquiry is that his murder is related to the Kinahan-Hutch feud, which has claimed 18 lives over the last three years. It is understood Mr Staunton was a member of the extended Hutch family.
Local superintendent Gerry Wall said Mr Staunton was not involved in any criminality that they are aware of.
Supt Wall said Mr Staunton’s father Stan was the house when his son was shot dead outside and that no firearm has yet been recovered.
He said Mr Staunton finished up at his stall at the Beggar’s Bush junction at 8pm on Thursday and drove his white Mercedes van with distinctive red lines (96-D-22788) from Bath Avenue to his house.
He arrived at his home in Glen Easton estate between 9 and 9.15pm.
“As he left his van to enter into his house a gunman approached him and shot him on several occasions and left him to die on the roadway outside his house,” Supt Wall told a media briefing at Leixlip Garda station on Friday.
The officer said gardaí are seeking dash cam footage of Mr Staunton’s van and also a silver/grey Volvo S40 car, which was recovered on Thursday night in Manor Kilbride, Co Wicklow.
Gardaí believe the Volvo S40 may have taken the gunman to and from the scene.
Followed
Supt Wall said gardaí are “certainly” investigating if and why Mr Staunton left his stall early, before the soccer game had finished.
“As we know people do things for various different reasons.”
He said 30 detectives and uniformed members of the gardaí worked throughout Thursday night.
Scenarios being looked at by gardaí include whether Mr Staunton was followed home from Bath Avenue.
He said dash cam footage is “vital” to their investigations and all information received will be treated with “absolute confidentiality”.
“All murder is brutal and callous and we are always reliant on the public.
“They’ve yet to let us down and it’s through their support and the use of the Confidential Information Line 1800 666 111 or indeed Leixlip Garda station 01 666 7800 where all or any information they might give us will be treated with complete confidentiality.”
In the past, the Kinahan gang has targeted members of the family or those associates even though many of the victims were not involved in organised crime or feuding.
In response, the Garda has put in place a major operation in Dublin city centre and in some suburbs where some of the key gang figures live and that effort has quelled the violence.
Convictions
A number of senior gang members have been convicted for their role in feud killings and others had fled abroad to hide from their rivals and the Garda.
However, while last night’s murder would be the first Kinahan-Hutch feud killing since January, it has given rise to fears about a renewal of violence from the dispute.
The alarm was raised immediately the shooting occurred and gardaí and paramedics rushed to the scene where he was pronounced dead a short time later.
His remains were left in situ overnight and there was due to be a preliminary examination of the scene by a pathologist this morning before the body is removed for a postmortem, which was expected to show he was shot in the head.
Gardaí are working on theory the killers knew their victim’s movements. They appeared to be waiting for him to return home from the Ireland soccer game, where he sold hats and scarves and other items.
Detectives are trying to establish if the men were waiting at the scene, perhaps in a white coloured car gardaí believe they used to escape.
Last night’s murder comes after a relatively quiet year in the Kinahan-Hutch feud; one in which the Garda has struck a number of heavy blows against the gang.
Drugs, cash and firearms have been seized very frequently from gang members. And some Kinahan gang members, or men hired by them to carry out gun attacks, have been caught on their way to carry out murders.