How can a judge be removed from office?

No Irish judge has ever been formally unseated from their position 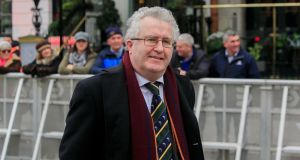 Séamus Woulfe: His conduct is in question over his attendance at the Oireachtas Golf Society dinner in Clifden last week. Photograph: Gareth Chaney Collins

Elected officials cannot make a finding of misbehaviour against a Supreme Court judge because of the constitutionally protected separation of powers between the Oireachtas and the judiciary.

Supreme Court justices cannot, according to the Constitution, be removed from office except for “stated misbehaviour or incapacity” and then only on the basis of resolutions passed by Dáil Éireann and by Seanad Éireann calling for their removal.

Investigating and determining whether a judge has misbehaved will eventually rest with the recently established Judicial Council but, for now, because the council is still only in an embryonic stage, examining the conduct of a judge remains uncharted territory.

A code of conduct for judges and a mechanism for dealing with complaints about judges is contained in legislation setting up the council late last year, but the complaints and investigations system covered by the legislation has yet to come fully into force.

The conduct of newly appointed Supreme Court Justice Séamus Woulfe is in question over his attendance at the Oireachtas Golf Society dinner in Clifden last week – an event that the State’s acting chief medical officer, Dr Ronan Glynn, said was “not in line with public health guidance”.

Mr Justice Woulfe is under pressure given that he, as the former attorney general in the last government, was responsible for drafting regulations to enforce public health guidance to prevent the spread of Covid-19. In his current judicial role, he is responsible for enforcing these rules.

He has been criticised because by allegedly breaching health guidelines through his attendance at the Connemara dinner, he is potentially undermining them and endangering public health.

The Judicial Council, which is made up of the country’s judges, has been in existence only since December 2019 and met for the first time only in February 2020.

A committee of the council, the Judicial Conduct Committee, handles complaints against judges and its function is to “promote and maintain high standards of conduct among judges”, requiring judges to “uphold and exemplify” judicial independence, integrity, propriety and competence.

The committee is made up of senior judges, elected judges and five lay members. It can try to resolve the complaint initially by informal means or refer the complaint to a “panel of inquiry”.

The panel reports its findings to the Judicial Conduct Committee, which in turn can make a referral on the stated misbehaviour of a judge to the Minister for Justice who proposes a motion under Article 35.4.1 of the Constitution in either House of the Oireachtas for their removal.

However, the Judicial Conduct Committee, while appointed, is only now drafting guidelines for how the complaints system will work, and the section of the law governing this system will not begin until the guidelines have been adopted by the council.

So the existing system remains where the Dáil can appoint a Select Committee to hear evidence in respect of a motion to determine whether a judge has misbehaved, though the committee can make no findings of fact nor make any recommendations nor express any opinions on the facts.

Given that judges resigned in all previous high-profile controversies over judicial behaviour – such as the Philip Sheedy and Brian Curtin affairs – the mechanism to remove a judge has never been used.