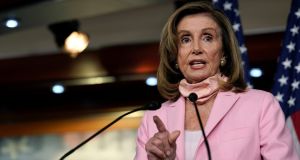 Nancy Pelosi: she has warned there should be “no cutting corners” in the vaccine approval process. Photograph: AP Photo/Susan Walsh

The Trump administration is considering bypassing normal US regulatory standards to fast-track an experimental coronavirus vaccine from the UK for use in the US ahead of the presidential election, according to three people briefed on the plan.

One option being explored to speed up the availability of a vaccine would involve the US Food and Drug Administration (FDA) awarding “emergency-use authorisation” (EUA) in October to a vaccine being developed in a partnership between AstraZeneca and Oxford university based on the results from a relatively small UK study if it is successful, the people said.

The AstraZeneca study has enrolled 10,000 volunteers, whereas the US government’s scientific agencies have said that a vaccine would need to be studied in 30,000 people to pass the threshold for authorisation.

AstraZeneca is also conducting a larger study with 30,000 volunteers, although the results from that will come after the smaller trial.

Making a vaccine available before the election could allow US president Donald Trump to claim he has turned the tide on a virus that has killed more than 170,000 Americans following widespread criticism of his handling of the pandemic.

In his convention speech on Thursday night, Joe Biden, Mr Trump’s Democratic opponent, said that the US response to the virus was the “worst performance of any nation”.

However, if the Trump administration does rush through emergency authorisation ahead of the election by skirting normal government guidelines it could dent already shaky public confidence in the safety of vaccines ahead of one of the largest mass-immunisation programmes in US history.

Mark Meadows, White House chief-of-staff, and Steven Mnuchin, Treasury secretary, have told top Democrats that the administration was considering fast-tracking a vaccine, according to one person briefed on a July 30th meeting the pair held with Nancy Pelosi, the Democratic speaker of the House of Representatives.

Mr Meadows said in the meeting that there could be emergency authorisation, possibly for the AstraZeneca vaccine, in September.

Mr Mnuchin added that the administration expected an emergency-use authorisation for a vaccine before full approval, said the person, who added that Ms Pelosi warned that there should be “no cutting corners” in the vaccine approval process.

A spokesperson for the Treasury secretary said: “Secretary Mnuchin did not make any comments regarding AstraZeneca, nor is he familiar with the specifics of the AstraZeneca vaccine candidate. He is also not aware of any plans the FDA may have regarding any emergency use authorisation for any potential vaccine, beyond what he has heard publicly stated.

“The secretary believes, and has always believed, that any decision on vaccine candidates and any possible EUA is up to the FDA.”

If the FDA, which is led by commissioner Stephen Hahn, were to grant emergency approval to the AstraZeneca vaccine based on the Oxford study it could provoke a string of resignations from the agency.

Earlier this week Dr Peter Marks, director of the FDA’s centre for biologics evaluation and research – which is responsible for assessing the vaccines – told Reuters that he would resign if the agency were to approve a jab before definitive data showing it was safe and effective.

“I could not stand by and see something that was unsafe or ineffective that was being put through,” Dr Marks said. “You have to decide where your red line is, and that’s my red line.” – Financial Times Service