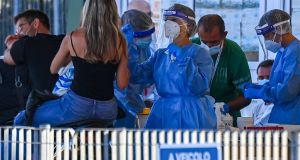 A sharp rise in the number of coronavirus infections over the past two weeks has put European governments on high alert as holidaymakers return home to big cities, and teachers and pupils prepare for the start of the school year after months of disruption.

But leaders are eager to avoid reimposing drastic controls on freedom of movement because they want to allow economies to recover from the deepest recession since the second World War. France has opted to control the spread of the virus rather than attempt to eliminate it completely, and French president Emmanuel Macron has said there is no such thing as a “zero risk” society.

Before the latest upsurge, strict national lockdowns in the spring sharply reduced the spread of Covid-19 in Europe. But in Spain, in particular, the virus is now returning rapidly, with 8,000 new infections reported on Friday alone.

According to the latest figures from the EU’s European Centre for Disease Prevention and Control, Spain recorded 153 cases per 100,000 in the previous 14 days, compared with 121 for Malta, 96 for Luxembourg, 87 for Romania, 60 for France, 56 for Belgium, 22 for the UK and 20 for Germany.

Spain is not alone. On Saturday, Germany recorded its highest daily infection rate since April, with 2,034 new cases.

The Robert Koch Institute, Germany’s main public health authority, said the cumulative incidence of Covid-19 over the past seven days had risen sharply across all of Germany’s 16 regions, a trajectory it described as “alarming”. It blamed the surge on family get-togethers and parties, and on young people returning from holidays.

France has also reported a rapid rise in the number of those testing positive, announcing more than 4,000 new cases on both Thursday and Friday, the highest daily totals since the easing of the country’s lockdown in mid-May.

Most of those infected are young adults who tend not to suffer severe symptoms, the French health authorities say, which is one reason why the number of those being hospitalised or needing intensive care has yet to show a substantial increase.

However, Olivier Véran, France’s health minister, said in an interview published on Sunday that infections were already spreading between age groups and rising among the elderly in the Marseille area. “We have to avoid this situation at all costs,” he said. “It would put our health system under pressure and be extremely problematic.”

In Italy, new daily cases have also increased, reaching 947 on Friday, due to more travel and nightlife activities over the summer holidays.

Even Greece, which has avoided the worst of the pandemic so far, reported a record 269 infections on Thursday as young Greeks returned from holidays on the Aegean Islands with their crowded beach bars and private parties.

Spain’s death rate is already rising, which makes the current surge in infection rates particularly alarming given the weeks-long lag between contracting the virus and death in many cases.

“If we let transmission keep on rising...we are going to end up with many people hospitalised, many people in intensive care, and many deaths,” Fernando Simón, the doctor leading the Spanish government’s battle against the virus, said on Thursday. “We know that each youth can infect family members and ends up creating cases involving older people.”

Some experts, however, are calling for calm, arguing that there is little risk of reaching the mortality peaks of hundreds of deaths per day which several European countries experienced in March and April.

Martin Blachier, an epidemiologist at Public Health Expertise in Paris, said his consultancy estimated there were at present about 20,000 new infections a day in France (including the thousands confirmed by testing), compared with 400,000 a day at the height of the pandemic

Increased mask-wearing regulations – such as this week’s order from the French government that pupils wear them in classrooms – would help control the spread of infection, he said.