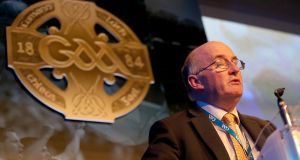 GAA President John Horan has said the organisation is not “looking for conflict” after issuing a statement earlier this week about the acting chief medical officer Dr Ronan Glynn and the National Public Health Emergency Team (NPHET).

Mr Horan also said the sporting body is not seeking a meeting with Dr Glynn but does want the data which informed Tuesday’s decision to restrict sporting activity.

NPHET made recommendations that matches should be behind closed doors and that training outdoors should be restricted to 15 people.

The measures come less than a month before intercounty training is due to restart.

A statement from the GAA on Tuesday said: “Following this evening’s unexpected announcement, the GAA invites Dr Ronan Glynn and NPHET to present the empirical evidence which informed the requirement for the Association to curtail its activities.

“The association will tonight be issuing an invitation to Dr Glynn to meet with its Covid Advisory Group in this regard without delay. The GAA and its members remain at all times committed to protecting public health.”

Mr Horan said on Sunday that grassroots members were “taken by surprise” by the latest restrictions.

“It kind of undermined our confidence in our overall response to things with the announcement on Tuesday. We’ve been working very hard with our Covid committee to keep the operation going on the ground. We’re not looking for conflict,” Mr Horan told RTÉ’s News at One. “All we are actually looking for is the data on which the decisions were made. We would like to add that to the data we have been compiling with our Covid committee so we could inform ourselves to make better decisions on the ground and that we, the GAA, are not letting the side down in all of this.”

Mr Horan said the GAA had established a Covid committee on May 11th which includes Professor Mary Horgan, county medics and healthy and safety personnel.

He said they had “worked hard” and put an education programme together. He said he has “no question” as to how Dr Glynn or NPHET are performing or doing their job and that they are in a “very challenging time” and the GAA is “not offering a criticism”.

He said he has written a personal letter to Dr Glynn but hasn’t received a response yet.

Mr Horan said Covid-19 has posed a “great challenge” for the GAA and that it intends to borrow money in order to fund county boards. “We are engaging with financial institutions, we intend to borrow money and we intend to distribute that to keep the actual functioning of the organisation,” he said.

Mr Horan said the GAA took in €74 million last year but that it doesn’t build up “massive reserves”.

“Our expenditure and operations is around 15 per cent of that funding and the other 85 per cent is redistributed through units here and international units overseas,” he said.

Mr Horan also said the GAA is “hopeful and confident” that finance will not stop the intercounty championship going ahead.

He said the GAA will have to engage with the GPA on the “comfort of intercounty players actually getting involved”.

“The nation will need live sport on the television at the weekends when we go through the long evenings of the winter and if we as a national organisation can deliver that moral lift to the country we won’t be found wanting,” he said.

Mr Horan indicated that if an intercounty player tests positive for the virus during the championship that the team will have to step aside from the competition.

He said in the 1940s Tipperary and Kilkenny were removed from the All-Ireland Championship because there was “a foot and mouth problem”.

“I think people accepted that and I think everybody getting involved in this will actually take on board, and we will have protocols in place, that if a county goes down because of the narrow time frame in which we are running the competition they will just have to step aside,” he said.