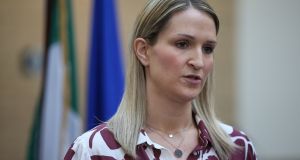 Minister for Justice Helen McEntee: a spokesman said she is ‘committed to finding suitable means to progress any necessary legislative changes as expeditiously as possible in order to respond to concerns that have been raised’. Photograph: Nick Bradshaw

Minister for Justice Helen McEntee has signalled her intention to pursue changes to legislation following a court ruling that bans the naming of a deceased child victim of crime.

Last month the Court of Appeal rejected an application by several media outlets to allow them identify a woman who killed her three-year-old child.

She was found not guilty of murder by reason of insanity following a short trial last year.

Before the trial began, two High Court judges ordered that the victim should not be identified. Consequently, the woman could not be named.

Counsel for the Director of Public Prosecutions had requested the order, holding that Section 252 of the Children Act 2001 makes it an offence to publish anything that could identify a child who is an alleged victim of an offence, including a deceased child.

The Court of Appeal upheld that interpretation. Mr Justice George Birmingham said that while its ruling might be of surprise to the media, it was not possible to read Section 252 “as not including a deceased person who was a child at the time of death”.

He said the language in the statute is “clear and unequivocal” and if change was required, it would be a matter for the Oireachtas to consider.

The issue technically remains before the courts as the period for filing an appeal to the Supreme Court has not expired. However, Ms McEntee has given a strong indication the matter could progress to the legislature.

A spokesman for the Minister said while the ruling remains under review by officials at the Department, she is “committed to finding suitable means to progress any necessary legislative changes as expeditiously as possible in order to respond to concerns that have been raised”.

The Minister is also open to hearing the views of anyone affected by the ruling, particularly a bereaved parent or relative. To date, one such submission has been received.

Concerns arising from the ruling relate to the ability of the press to report in detail on criminal cases and on the right of those affected, such as victims and family members, to have their views heard and expressed in their name.

The ruling also means that when a child victim of crime turns 18, the prohibition would remain in place. This would prove consequential in cases of rape or sexual abuse, for instance, where a victim wishes to waive their right to anonymity in order to allow for the identification of the perpetrator and, potentially, to make a public statement, as often occurs.

Tom O’Malley, senior law lecturer at NUI Galway and a member of the Irish Law Reform Commission, said that while the Court of Appeal had to interpret the law by giving it plain and ordinary meaning, “if it’s correct in its interpretation, the Government should review the section in order to determine precisely which class of persons it is designed to protect”.

He said a revision of the law might allow, for example in the case of murder, that the child’s identity could be revealed unless the court has good reason for ruling to the contrary.

“In delayed prosecutions for childhood sexual abuse, the revised law could confirm that the victim, if an adult at the time of the conviction, may consent to having their name revealed.”

Mr O’Malley also said he agreed with a separate interpretation by Mr Justice Tony Hunt at the Central Criminal Court that the prohibition need not apply where a victim was a child when the offence was committed but who is an adult, and perhaps well into adulthood, when the proceedings take place.