Number of cash seizures by Garda now at unprecedented levels 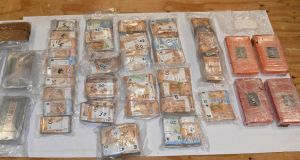 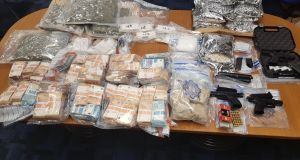 The number of cash seizures being made by the Garda has surged to unprecedented levels as many cash-based businesses that criminals normally use to hide or launder drug money have been closed due to the Covid-19 pandemic.

So far this year gardaí have seized €16.35 million in cash, mostly from drugs gangs, which is more than double the amount seized in recent years.

Garda sources have told The Irish Times that criminals were now being forced to “hoard” the proceeds of drug dealing and that these large sums of money were being found when those dealers’ homes were raided by gardaí looking for drugs and guns.

However, many of these have been closed for very long periods during the pandemic. And for those businesses that have remained open, the flow of cash through them has slowed as more people have switched to card payments, and away from cash, as a precaution against contracting Covid-19.

“It’s meant the opportunity to quickly put money into a cash business to get rid of it and launder it is either gone for these guys or the amount they can get rid of is much lower,” said one Garda source. “So they are having to hoard the money now and we’re finding more and more of it during searches.”

Gardaí pointed to the fact there had been repeated cash seizures – of between €10,000 and €30,000 – in the same regional towns since the start of the pandemic. This, they said, underlined the value of controlling even a small part of the drugs trade in relatively small towns.

The total €16.35 million in cash in the first 10 months of this year only includes cash being found during searches, mostly targeting drugs and guns. As with the figures for the other years, it does not include any money being frozen in bank accounts by the Criminal Assets Bureau or other units such as the Garda National Economic Crime Bureau.

The Irish Times is aware of 59 significant cash seizures, totalling €9.6 million, since mid-March when lockdown measures were first introduced. However, there were also a much larger number of seizures of smaller amounts during that period, which brings the total cash seized to date this year to over €16 million.

Almost €7.8 million of this total was found during operations by Drugs and Organised Crime Bureau (DOCB). That was more than double the €3.44 million it seized in 2017, the previous record year.

Assistant Commissioner John O’Driscoll, head of the Garda’s organised and serious crime section, said his personnel, including the DOCB, were determined to deprive gangs of money, drugs and guns, from which they derived power.

“The motivation for the criminal activity engaged in by organised criminal gangs is financial gain, from which they derive their ability to intimidate and inflict harm on communities,” he said, adding the large amount of cash seized this year showed gardaí were enjoying significant success.

In some Garda searches in recent months, gardaí discovered both cash and drugs with a combined value of more than €1 million in the same location.

Further significant cash finds have been made by gardaí this month and on Saturday an estimated €110,000 in cash and a vehicle were seized in Coolock, north Dublin.

Despite such seizures, Garda officers believe the drugs trade is proving resilient.

A very significant portion of it is conducted by drug users ordering narcotics from their local dealers over the phone and having them home delivered or arranging to collect them at a meeting point.

This is the drug trade’s equivalent of retail’s “click and collect”, a business that has grown exponentially since mass mobile phone use began in the 1990s.

When the first Covid-19 lockdown began in March, the streets of large towns and cities became relatively deserted as people stayed home and retail and other businesses closed. That meant drug dealing on the streets was much easier for gardaí to spot. At the same time, the Garda’s presence on the streets was dramatically increased for the pandemic policing operation.

Cases of “possession of drugs for sale or supply” increased by 35 per cent in the second quarter of the year compared to the same period last year. The number of “possession of drugs for personal use” has increased by 2 per cent at a time when other offences associated with the night-time economy – drink driving, assaults and public order – have plummeted.

Senior Garda officers have also pointed to the series of multimillion euro drugs seizures in the last six months as evidence of continued high demand for drugs and the ability of gangs to raise money to import very large quantities of drugs from abroad.