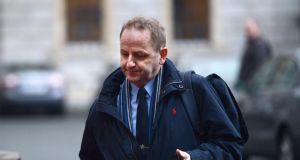 The Government is likely to be advised to open the senior ranks of An Garda Síochána to officers from abroad.

The Policing Authority, which last month assumed responsibility for filling senior posts, has said it is in favour of the positions being opened to overseas applicants.

It recently met to discuss the issue with the Garda Inspectorate which is currently preparing a report for Government on entry routes into the force.

The meeting took place before the latest controversy over the alleged smearing of Garda whistleblower Sgt Maurice McCabe by some senior officers. The controversy is likely to increase pressure on the Government to act on the inspectorate’s anticipated recommendation to open senior posts to officers from abroad as the force struggles to reform.

While civilians have been hired from abroad into the Garda and foreign nationals have joined the Garda as recruits, there has been no movement on opening up contests to fill the most senior posts.

After former Garda commissioner Martin Callinan retired suddenly in 2014 his position was advertised externally for the first time in the history of the force, with an international headhunt also undertaken.

Deputy commissioner Nóirín O’Sullivan then became acting Garda Commissioner. She emerged victorious in the open competition that followed and so became commissioner on a permanent basis.

In coming months, about half of the 10 assistant commissioner posts in the Garda are due to become vacant as the incumbents retire on age grounds. While the Policing Authority has advertised those jobs, only current Garda and PSNI members are eligible to apply.

Regulations drawn up by the Government last year for the Policing Authority forbid the posts of superintendent, chief superintendent and assistant commissioner being offered to anyone except Garda and PSNI members.

“Members of police forces throughout the UK, Australia, the US and the rest of the world are not eligible under the current regulations,” the Policing Authority said in reply to queries from The Irish Times.

It added that “in due course” it would “like the assistant commissioner position to be opened more widely”.

The Department of Justice said eligibility for senior posts from superintendent to assistant commissioner had been limited to Garda and PSNI members in the 2016 regulations to reflect the terms of the Garda Síochána Act, 2005.

However, it pointed out that the Garda Inspectorate was currently working on its report on entry routes into the Garda.

“Having regard to the opening of senior posts across the wider public service the Tánaiste requested the Garda Inspectorate last autumn to examine entry routes to An Garda Síochána and to make any recommendations that it considers appropriate,” it said in reply to queries.

The Garda Inspectorate’s report is expected in the coming months.

Investigation under way after body found in Dublin house fire 10:45
Cousins went paddle boarding at Furbo as usual location was cut off due to Covid-19 10:27
Prominent businessman and GAA sponsor dies in crash 09:24
Safety official urges some water users to carry personal locator beacons 06:00
Inside the O’Brien Fine Foods factory in lockdown Kildare 05:14

1 Inside the O’Brien Fine Foods factory in lockdown Kildare
2 ‘It was pitch black’ - Rescued teenager describes night afloat with her cousin in Galway Bay
3 A million trees, including 400,000 oaks, to be destroyed this week
4 Cousins went paddle boarding at Furbo as usual location was cut off due to Covid-19
5 Covid-19: Almost 50,000 more people waiting for outpatient appointment since start of year
Real news has value SUBSCRIBE