Gardaí search property in Ballymun and find drugs with estimated street value of €6,000 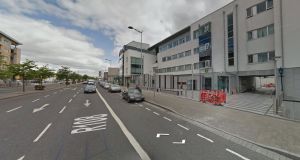 A man in his late teens was arrested and detained at Ballymun Garda station (above right) under provisions of Section 4, the Criminal Justice Act. File photograph: Google Street View

A man has been arrested and quantities of heroin, cocaine and tablets seized in Ballymun.

Gardaí searched a property in Shangan Terrace on Friday night and found the drugs, with an estimated street value of €6,000, subject to analysis.

A man in his late teens was arrested and detained at Ballymun Garda station under provisions of Section 4, the Criminal Justice Act.

He was later released and a file will be prepared for the Director of Public Prosecutions.

The operation was part of ongoing investigations targeting the sale and supply of drugs on the northside of Dublin, with gardaí from the Ballymun Drug Unit and members of the Task Force involved.