Checkpoint was set up in Dundalk, Co Louth earlier this week 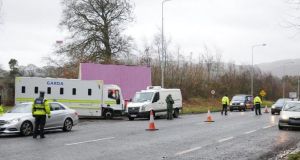 The operation took place on Monday, February 6th, and was carried out by the immigration unit at Dundalk garda station assisted by the Garda National Immigration Bureau.

An Immigration Operation occurred at Dundalk, Co. Louth on the 6th Feb, where 8 persons were found to be in breach of immigration offences. pic.twitter.com/awHUWfzZdP

The eight people were detected at a checkpoint and were returned to the North or the UK.