Cyclist dies after collision with car while training with club 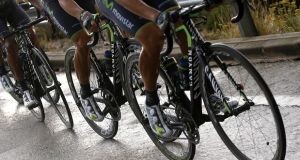 A female cyclist has died while on a training ride with Orwell Wheelers Cycling Club. File photograph: EPA

Gardaí have launched an investigation after a cyclist was killed after she was in collision with a vehicle this morning.

The dead woman, who was on a training ride with Orwell Wheelers Cycling Club at the time, was in collision with a car at Rathcoffey, Co Kildare. The man driving the car, who was in his late 20s, was unhurt.

The scene of the collision, between Clane and Maynooth, was sealed off just before 12 noon and diversions were in place.

A Garda inquiry has begun, though early indications suggest the cyclist was turning a corner at the back of a cycling group when she was in collision with an oncoming vehicle and suffered fatal injuries.

The remains of the victim, who was in her 30s, were taken to Naas General Hospital where a postmortem was set to be carried out.

The deceased cyclist, who has not yet been named by the Garda, was a member of Orwell Wheelers, based in Dundrum, south Dublin.

Members of the club were cycling through the Rathcoffey area when the incident occurred.

A spokesman for the club told The Irish Times: “We are aware of the tragic accident and our thoughts are with the family.”