Gardaí have opened an investigation after footage was shared online of a sulky race taking place on the N7 motorway in Naas. 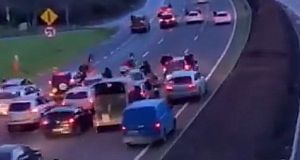 Street lights, empty roads and relative darkness suggest the race was held in the early hours of the morning.

A sulky race which took up four lanes of a motorway in Dublin is under investigation by gardaí.

Video emerged on social media of the race which took place at some stage over the weekend.

It shows two horse and carts travelling at speed down the inbound lane of the N7 motorway in Naas.

The carts, however, are flanked to the front and rear by rows of tightly packed cars and vans acting as a sort of moving cordon.

Six vehicles at the front of the race had people sitting out of the driver and passenger side doors to the rear, as do a number of those travelling closely behind the horses and drivers.

The street lights, empty roads and relative darkness suggest the race was held in the early hours of the morning. A Garda spokesman said investigations into the incident are ongoing.

The video circulating on social media was taken from a nearby overpass. Voices are heard shouting apparently in support of one of the racers.