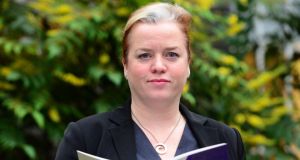 Clíona Saidléar of the Rape Crisis Network called on the State to show it is ‘willing and able to protect survivors who come forward’. Photograph: Dara Mac Dónaill

The Rape Crisis Network has called on the Garda to investigate threats made to a victim of sexual violence in a courtroom after two men were jailed for raping her.

After the sentence was handed down and the judge had exited the courtroom, some supporters of the men shouted at the victim. One woman shouted obscenities and another person shouted, “You’re a liar” and “You’re going to pay for this”.

Clíona Saidléar, executive director of the Rape Crisis Network Ireland, condemned the remarks and called on the State to show it is “willing and able to protect survivors who come forward in this manner”.

“This is a threat, even out of the context that it’s in, this is a threat from one person to another person and that’s a matter for the gardaí. We would also wonder if there was an element of contempt of court there,” Ms Saidléar said.

“We would really like to see the arms of the State really taking it [verbal abuse] seriously because it can have a hugely detrimental impact on not only this survivor, but others who are contemplating, or in the process of, coming forward through the justice system.”

Ms Saidléar said that under the Victims of Crime Act, there were mechanisms in place to manage conduct in and around a court building and to ensure victims were not subjected to intimidation.

“There is already a whole set of rights and rules and conditions and that is certainly something that maybe the Courts Service should look at,” she said.

Security sources said, however, that because the judge had left the court it was no longer in session and that any inquiry into the threats made would be carried out by the Garda rather than the presiding judge or the Courts Service.

In reply to queries, Garda headquarters said the force was “aware of actions that occurred in the Courts of Criminal Justice after a court had adjourned post a sentence hearing”.

“No formal complaints have been made by any parties at this time. The victim in the case continues to receive the full support of the Garda.”

Garda sources also said in the event there was no complaint, the matter would still be examined by gardaí with a view to a criminal investigation being carried out.

Ms Saidléar sought to reassure individuals who may be affected by the behaviour.

“I think what they need to hear loud and clear is that this is an individual and they do not speak for the whole of society,” she added.“What I would say to them is there is lots of support out there for them. They are believed and they are respected.”

Ms Saidléar said this incident showed the country still had work to do with regards to the treatment of victims of sexual violence.

“We sometimes think that we have come a long way in terms of sexual violence, in terms of stigma and people not being believed,” she said. “But we do understand that often survivors are coming forward in a situation where they are not believed by certain parties and cohorts so there is still a lot of work to be done.”