Father believed vaccination was right thing to do, court told 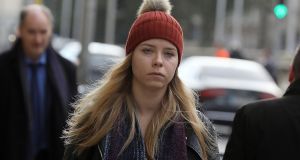 Aoife Bennett of Naas, Co Kildare pictured at the Four Courts for the continuation of her High Court action. Photograph: Collins Courts 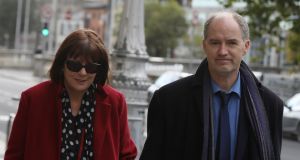 Pat and Mary Bennett, parents of Aoife Bennett pictured at the Four Courts for the continuation of a High Court action taken by their daughter, Aoife. Photogaph: Collins Courts

The father of a young woman who claims she developed narcolepsy after getting the swine flu vaccine has told the High Court he believed getting his children vaccinated was the responsible thing to do.

“It felt like joining the army,” Pat Bennett, a manager with the HSE told the court. “You need to do this for your country.”

Mr Bennett said he encouraged his wife, Mary, to get their children vaccinated during the 2009 vaccination campaign. “I take huge responsibility for what’s happened,” he said. “And my family has to live with it.”

His daughter, Aoife Bennett (26), of Naas, Co Kildare, is suing the Minister for Health, the HSE, the manufacturer of the vaccine, Glaxosmithkline Biologicals SA (GSK), and the Health Products Regulatory Agency, which monitors Irish medicines.

She is alleging a number of matters arising from her developing narcolepsy and catalexy disorder, a condition that causes occasional, sudden collapse, in the wake of taking the Pandemrix vaccine in December 2009. The claims are being contested.

Mr Bennett told his daughter’s counsel, Jonathan Kilfeather SC, that he understood there was always a risk with any medication. He said the consent his daughter gave when receiving the vaccine, which was given after the family had discussed the matter, was not valid consent.

He did not know at the time that there had “not been stringent testing” of the vaccine on people of his daughter’s age. He also had not realised that the swine flu pandemic was on a “downward curve” when she was vaccinated, he said.

Questioned by Maurice Collins SC, for the HSE, Mr Bennett agreed that when he himself got the vaccine in February 2010, the HSE was telling people that the pandemic was subsiding. “Yes, but the HSE was still holding [vaccination] clinics,” Mr Bennett said.

He said the fact that the State had given an indemnity to GSK against claims for damages associated with the vaccine would have been “a red light” for him. “The drug company didn’t trust their own drug. That’s what I took from that.”

Mr Bennett agreed he had been aware the indemnity had been discussed by an Oireachtas committee in September 2009, where was explained that the measure was considered appropriate in the context of a newly-emergent strain of flu virus.

Mr Collins said the indemnity was one of seven issues it was being claimed that, had Mr Bennett and his wife known about them, they would not have advised their daughter to get vaccinated.

Mr Bennett said the fact that he had known about the indemnity did not mean he approved of it. His main concern at the time, he said, was that the vaccine was safe.

Mr Bennett said he knew there were risks associated with all vaccines but he expected possible downsides such as nausea or a fever, “not a life-long illness”.

During October and November the rate of infection began to lessen, Mr Collins said, but people were still getting infected, a minority were getting very sick, and some were dying. Mr Bennett said he had been aware of the HSE briefings on this during the period.

There was still a value in getting vaccinated, Mr Collins said, though most people who became infected did not get seriously ill.

“What you are basically saying to me,” Mr Bennett said, “ is that if my daughter had got the swine flu, she would be fine now.”

Mr Collins said he was not saying that. “I’m saying you consented because you didn’t want your children to run the risk of getting the swine flu,” he said.

His evidence continues next week.