Garda at centre of investigation had phone wiped, tribunal hears 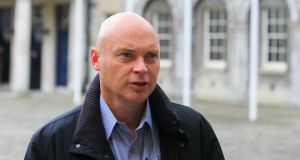 The garda at the centre of an investigation alleging his collusion with an Athlone heroin-dealer had his phone wiped before investigators seized it, a tribunal has heard.

The Disclosures Tribunal is hearing from Garda Nicholas Keogh who alleges that a senior member of the Athlone drugs unit, identified to the tribunal as Garda A, was in an improper relationship with a heroin dealer, identified as Ms B and described as having an estimated €2,500 a week income at the time.

The tribunal, chaired by Judge Sean Ryan, is investigating how Gda Keogh was treated after he made his protected disclosure in 2014.

Garda Keogh has made 10 complaints to the tribunal about “serious and deliberate flaws with regard to this investigation”.

His complaints include delays, missing evidence, failures to suspend suspects and inappropriate circumstances for taking statements that discouraged people from coming forward.

The tribunal heard that on May 9 2015 an investigations team which included former Assistant and Acting Commissioner Donall Ó Cualáin and senior detective Declan Mulcahy was set up to investigate Gda Keogh’s allegations of collusion.

The team were interviewing gardaí­ and taking statements in the station while Garda A was on duty. Garda Keogh told Judge Ryan that this was “insane” and like something from the comedy film Police Academy.

“Parts of the investigation were thorough but there were a lot of problems,” Garda Keogh told Judge Ryan.

He said that when Garda A’s mobile phone was seized on June 13th, 2015, it had been wiped. He said this was evidence that Garda A was “tipped off”.

“He had obvious prior knowledge, Garda A, that his phone was to be seized. Clearly. No doubt. Someone must have tipped him off. I don’t know who but I assume so, if all the info is wiped,” he said.

Mr Flanagan named Garda Keogh in the Dáil as a whistleblower on May 8th, 2014, the day of Garda Keogh’s protected disclosure.

Garda Keogh said that the phone was completely blank, with no phone numbers or any other information.

“Garda A was also capable of deleting the information on the phone,” he said. He said that the phone was a “huge” part of the investigation that could reveal contact between Garda A and Miss B.

Diarmaid McGuinness SC, for the tribunal, noted that if Mr Flanagan had not gone public that “the suspect might not have been aware” of a possible investigation.

The witness said the TD had told him “if I was not named in the Dáil that they would go after you but if you have it on public record it is for your protection.”

Garda Keogh said the day he told Det Mulcahy about phones being a priority the phone was seized.

Mr McGuinness asked if any other evidence disappeared or was disappearing around the time he talked to Det Mulcahy.

Garda Keogh: “Yes, there was commercial opium, a couple of kilos of it, that was stored in the same room as some DVDs.”

Garda Keogh will continue to give his evidence on Monday.