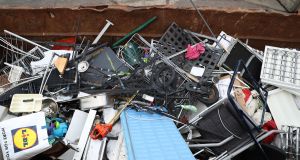 The men came in a group into the waste recycling yard and looked around before they started taking scrap metal. They were challenged by a worker and, moments later, tempers flared.

“Pretty quickly it escalated into a shouting match. Our employee stood their ground and the response was ‘I hope your kids like the smell of petrol’,” said David Tobin, renewables and circular economy director with Beauparc Utilities.

A senior executive with the largest waste company in the State, Tobin said his colleague was extremely upset following the incident, which was but one example of a rapidly-worsening pattern of threats against workers by waste metal thieves.

Beaupark, which runs waste services under the Panda, Greenstar and A1 brand names, has told the Government it was experiencing “a near crisis with continual harassment, trespass, intimidation and threats to our staff and customers”.

It has warned Minister for the Environment Richard Bruton that an urgent change in legislation was needed to end untraceable cash payments for scrap metal, which it said were acting “like seed capital for organised criminal gangs”.

“The availability of cash payments leads to the scrap dealer operating like an ATM for metal thieves. They steal metal from our site and drive down the road to the scrap dealer to get paid in cash,” Mr Bruton was told in a letter released under freedom-of-information legislation.

Mr Tobin told The Irish Times the widespread theft had gone hand in hand with intimidation of his employees, especially those who attempted to intercept the thieves. Some sites have taken to surrendering scrap metal outside their sites for gangs to take, rather than risk violence, threats or vandalism inside the waste-disposal facilities. He said a site office in one facility was recently trashed following a confrontation on the site with thieves.

“We are in fear, and reprisals have happened in the past,” Tobin said. A Beauparc site manager, who asked not to be named for fear of reprisal against his facility or his workers, said the problem had been going on for years. One of his employees left his job due to the issue and suffered from depression afterwards, he said.

He said employees who challenged the thieves had been told their own addresses in response. “Nobody can open their mouth, nobody opens their mouth,” he said. “[You] try and limit it, or manage it as best you can. You have it in the back of your head all the time that something might happen to the depot,” he said.

Tobin said the prevalence of the issue depended on a variety of factors, including the market price of various scrap metals. He said there was a “definite correlation” between scrap metal prices and theft, adding that geopolitical factors could also have an impact in Irish waste sites. “Some countries are nearly the sole source for certain metals, so if they go through difficulties there’s an upswing in demand for that metal,” he said.

Currently, copper sells through legitimate traders at about €3,000 per tonne but some informal dealers might only pay €500-€700, according to industry sources.

There are opportunists who will steal metal whenever they come across it but are not involved in organised theft. “They’re people with vans or trucks who would do odds and ends around the place. If they see some scrap they’ll throw it into the back of the van and get a bit of cash for it,” a Kildare-based garda said.

These thieves have been known to steal from a wide variety of sources, including house gates and statues from graveyards and historic sites.

Then, there are foreign gangs, usually from Eastern Europe, who travel to Ireland specifically for the purpose of stealing metal. They usually target the most valuable metals such as copper, which they steal from electrical wires and substations, but they have been known to steal from scrapyards as they tour around the country.

By far the most common category of thieves, however, is organised Irish gangs operating independently in various areas of the country.

Scrap metal theft is the “bread and butter” work for many of these gangs, one garda said, although most are also involved in other forms of low-level criminality including car theft, burglary and fraud offences.

Gangs involved in metal theft in Donegal and Tipperary have also been involved in targeting elderly people with door-to-door scams. Members call to the houses of elderly people living alone and tell them, usually falsely, that they need work done on their house. They then charge exorbitant rates for the work, often extracting money through intimidation tactics.

Criminal groups operating in Sligo and Roscommon have also been known to use scrap metal theft as a way of funding drug dealing. A minority also have access to firearms.

“They will work up enough cash to buy a kilo or half a kilo [of cocaine or another drug], then sell that in the community and start the process again,” a midlands-based community garda said.

Scrap metal theft has become so common that many businesses simply accept it as the cost of doing business and tolerate a certain level of loss.

Thefts are usually carried out without violence but gangs quickly turn to intimidation tactics if businesses attempt to resist. Confronting thieves or even enhancing security measures by installing fencing or CCTV systems has been met with intimidation, arson and violence in recent years.

Counterintuitively, violence and intimidation often tends to increase when the price of metal goes down. “There’s more competition and pressure and you have to gather a larger amount of stuff. People push back against it and then it gets violent,” the Kildare garda said.

As well as recycling and scrap metal yards, farmers are also a frequent target of thieves. The isolated nature of farming work means they are also more vulnerable to intimidation tactics.

Diarmuid Cronin, a development officer with Community Alert, said there was recently a spate of thefts of aluminium cattle trailers from farms which were then being “shredded” for scrap metal.

“We hear a lot of stories about people being intimidated. Farmers are out on their land and if they come across these people and ask them who they are or tell them to leave, straight away things get heavy-handed,” he said.

His organisation is calling for legislation banning cash purchases of scrap metal. “Cash should not be paid for metal, whether it is gold, aluminium or copper. The money should be paid to a bank account. It should be traceable.”

1 Dr Tony Holohan expected to return to his post next week
2 Covid-19 infections from funeral led to a third of restaurant’s staff self-isolating
3 Coronavirus: 442 new cases, 4 deaths as stricter house visitor limits recommended
4 How one couple’s weekend away resulted in 30 Covid-19 cases
5 Return to normal life, Russians were told – except for Vladimir Putin
Real news has value SUBSCRIBE