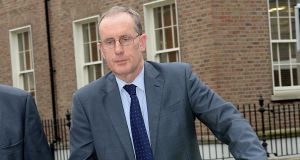 In a letter to councillors Owen Keegan said he was aware of ‘considerable disquiet’ among councillors concerning the ‘allegations of protection payments’. Photograph: Cyril Byrne / The Irish Times

Mr Keegan has told councillors he has “grave reservations” about requests for a special council meeting to discuss allegations of attacks and protection rackets at building sites in Cherry Orchard.

Last week the High Court was told protection money was paid by the council, and contractors working on its behalf, to west Dublin gangland figures to stop vandalism and assaults on workers at social housing sites in Cherry Orchard, Ballyfermot.

In a letter to councillors Mr Keegan said he was aware of “considerable disquiet” among councillors concerning the “allegations of protection payments”.

A team has been appointed to conduct an internal review of the incidents in question and of “City Council systems and processes generally around the management of its building sites” he said.

“The Government has indicated that it will be conducting its own investigation and I expect details of this in due course. I am also aware that Garda investigations into these matters are ongoing.”

He said he was aware there had been requests for a meeting to discuss the issue. However, he said he has “ grave reservations concerning this course of action, while the matter is under investigation by the City Council and by external agencies”.

Councillors did not have the benefit of legal privilege in the council chamber and there was a danger of making “defamatory comments about identifiable individuals”, Mr Keegan said.

“There is also a danger of reaching wrongful conclusions and/or prejudicing ongoing investigations. It is my view that now is not the appropriate time to have a special council meeting and I would request those members seeking such a meeting to reconsider their position.”

In a statement last week, the council said “no payments were made by the City Council to the individuals concerned”.

However, in his letter to councillors Mr Keegan said there was a “legitimate demand to find out what exactly happened and what role council officials may have played”.

He acknowledged it was a “very difficult time” for council staff and councillors. “Unfortunately, I will not be in a position to provide any report to the council until the internal review has been completed. Even then, I may be constrained by legal considerations and external requirements from reporting on the matter.”

Earlier this week, councillors agreed a motion proposed by Sinn Féin’s Daithí Doolan expressing “deep concern at reports of payments being made to criminal gangs in order to allow the construction of housing in Cherry Orchard”.