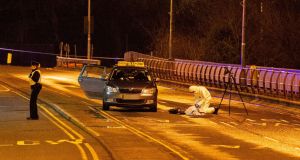 Gardaí at the scene of a shooting on the Bridge of Peace in Drogheda on Monday night. Photograph: Ciara Wilkinson

The taxi driver who was injured in a shooting in Drogheda on Monday night has described the experience as “terrifying”.

A number of shots were fired at a taxi being driven by John Myles on the Bridge of Peace at about 6.20pm.

It is understood the intended target was a front seat passenger in the taxi who is a key figure in the ongoing Drogheda feud.

Mr Myles told the Michael Reade show on Lm Fm that if he had not turned his back towards the shooter, he might have been paralysed. “The bullet went in and out, luckily enough it didn’t lodge in the back, if it had gone further I would have been paralysed for the rest of my life,” he said.

“I done nothing wrong on anybody. I picked up a lad and I ended up getting shot while he got out like the coward he is and ran.

“It’s me that’s shot, it’s me that’s suffering and has to explain to my kids what happened and how it happened. My daughter won’t go to school now, she’s at home. Because she’s panicking, so what do you do after that? Where do you go after that?

“These people think they can do what they like, when they like to people and my natural reaction by turning saved my life yesterday - I’m sitting here today because of that.

“They thought they were free to go along and shoot someone who had nothing to do with them. I want to clear my name as well - I can prove that I didn’t do anything wrong, I picked up a fare, done my work and got shot.”

Mr Myles said that people on the internet were accusing him of being involved in drugs, “which I never had, I never done that in my life. I wouldn’t allow it and I’m being accused of it.

“It’s about time they start thinking. I didn’t do anything wrong.”

The Garda’s main line of inquiry is the man Mr Myles had picked up and was carrying as a passenger in his taxi was the target of the ambush. Detectives also believe the shooting was linked to the Drogheda feud.

The injured taxi driver was being treated as a victim and witness in the attack, with no connection whatever to crime.

The man he was carrying as a passenger and who was the gunman’s target is known to gardai. He is in his early 20s and is from Drogheda, with links to one side of the feud in the Co Louth town that has been ongoing for 18 months between rival gangs.

He was a suspect in a very violent incident a number of years ago when a man was badly wounded but survived.

The target was in the taxi with his girlfriend when the gunman struck in Monday evening traffic. He had been warned his life is in danger as a result of his links to the feud and both he and the woman he was with fled from the taxi and managed to run to safety.

Gardai believe the attack was the latest incident in the feud and there are concerns tensions between the two sides were once again increasing after heavier policing in Drogheda in recent months had quelled the violence.

A number of men have been shot and wounded as part of the feud since July, 2018, and while they survived they suffered life-changing injuries.

To date two men have lost their lives in gun attacks directly linked to the Drogheda feud.

Richard Carberry (39) was fatally shot when he was ambushed by a gunman as he arrived at the family home on Castlemartin Drive, Bettystown, Co Meath, at about 11.40pm on Monday, November 4th, last.

Keith Branigan (29) was shot dead on the decking of a mobile home at the Ashling Caravan Park on the Termonfeckin to Clogherhead road at about 2.50pm on Tuesday, August 27th.

The two dead men and the man who was the intended target in Drogheda on Monday evening are regarded by gardaí as being linked to the same side of the feud.

The opposing faction is now being led by a criminal from the north east who had been away from the region for a period but returned last year. Since his return the gang he is aligned to has gained the upper hand in the drugs turf war.

Mr Myles described how he had been on the Peace Bridge at 6.20pm and a car cut him off. “Before I know it I’m looking to my left side and there’s a gun pointed in the window.

“I thought it was someone cutting across trying to get ahead of traffic, I blew the horn, before I knew if there was a guy pointing a gun.

“I don’t want to know who done it, I don’t care who done it. They were pointing at him, he was getting it and that was it, because he scoured (sic) out across me and ran, it was me who got it because I couldn’t get my seat belt off quick enough to get out. Because I turned I got it in the back.

“He got out across me, don’t know how he did it, the girl got out the back side of the car, and the two of them ran and left me there. Whether I was dead or alive, they didn’t care.

“I could have bled to death - they do what they do because they can’t do an honest day’s work and we all have to suffer because of what they’re doing. It’s us who has to suffer.”

Mr Myles said the shooter had been well covered up. “He was wearing a wooly mask, coward that he is.

“The guards tried to get me to settle down, but I wanted to phone my kids. I didn’t want them hearing second hand information. I was on the phone to them and on the phone to my brother-in-law, the guards got me to sit down and relax. That’s when it hit me.”

He said that his daughter had been phoning him all night and his son was very upset.

“When the guards came I was standing up, they asked was anyone shot and I said, yeah, me. I could feel the heat going down my back, knew then that was it.

“I didn’t know what to think, all that went through my head was my kids, what would happen to them.

‘None of us want this’

“I didn’t worry about anything else, didn’t care about the car. They wanted to come up to me, told them no said I would keep in touch with them through their mother. Didn’t want to let them see me.”

Mr Myles acknowledged that taxi drivers will not go into certain areas of Drogheda because of ongoing feud. When asked if had hesitated about picking up the fare, he admitted he had.

“Yes, I did. I thought I’d pick him up, it will be a one off. I’ll take a chance. Thinking what’s going to happen? It’s too busy. I didn’t know he was being watched getting into my car - I went one route. Because they were watching him I’m where I am today - the car in the garage and me shot.

“I don’t know how they got away. To do what they done, at the end of the day, to have the nerve to do it, obviously they were watching him being picked up by a taxi man. We’re out there doing a day’s work.

“They need to stop, do what they have to do, go into a field, don’t bring any one else into it, we didn’t ask for this, we don’t want it. None of us want this. How much more is going to happen before someone is killed?

“I was going to bring my daughter with me last night. But said I would collect her later. She could have been in the back of that car, but because of who I was bringing I said no, I’d collect her on the way back.”

Mr Myles called on people to stop putting up false claims about him on social media. “It’s wrong what they’re saying, it’s my life, it’s my kids lives they’re messing with, give it a rest, stop. I had nothing to do with that. It’s me that has to get over this over the next few weeks.”